I first went to Lancashire in May 2019. I hope to go back sometime and find some more St Mary's (maybe it will be less damp next time! October 2019 - it wasn't!). Click on a picture to read a bit more about the church (and maybe see more pictures of me!).

This church is also called St Mary-le-Ghyll ‘cos it’s on Ghyll Road and not really in Barnoldswick at all (which is pronounced "barn-OLDS-wick" as a nice lady at a café by the canal said).

I had to visit the church twice as the first time there was a funeral going on and I didn’t want to intrude (so I had a snooze in the car for a bit instead). The second time I visited, the church was closed and a man was cutting the grass with a very noisy mower.

This was a little St Mary’s and I would have liked to go inside. But, sadly, they had workmen putting up scaffolding and so the church wasn’t open. 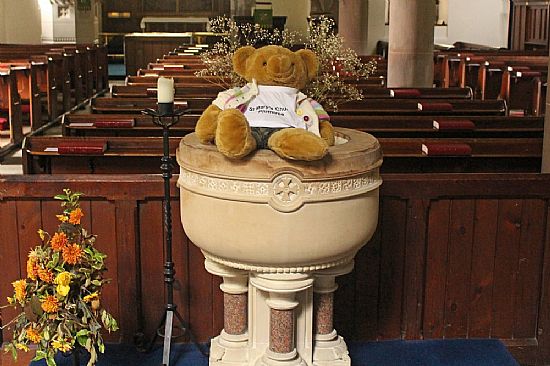 This little church has a very posh porch built on, with all sorts of handy facilities for humans (not needed by bears). We couldn’t find a proper sign outside, so I sat on a windowsill and Uncle Les took a picture of me beside the porch. I am rather small in the photo though.

I went inside and checked out the font too. I'm not too sure about this photo - I seem to be leaning back into a load of twigs and they look to be sprouting out my ears! 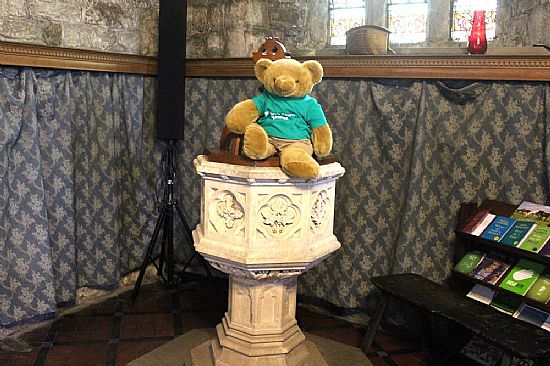 Isn't this a splendid blue sign, and a rather good wall to sit on (no rubbish bins or wheelie bins here!).

Inside there's a comfy octagonal font.

Well, it may not be an exciting blue sign, but at least the noticeboard has some stuff in it for me to read - and a comfy wall for me to sit on. Sadly, this St Mary's wasn't open for me to look around. 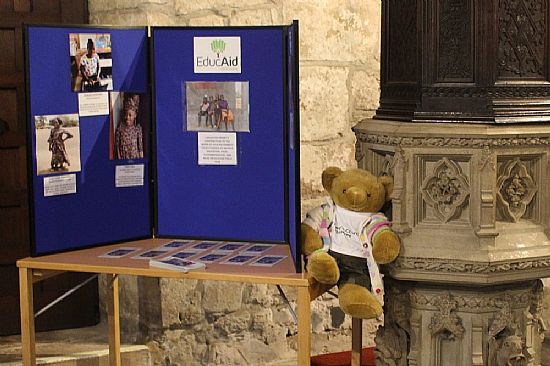 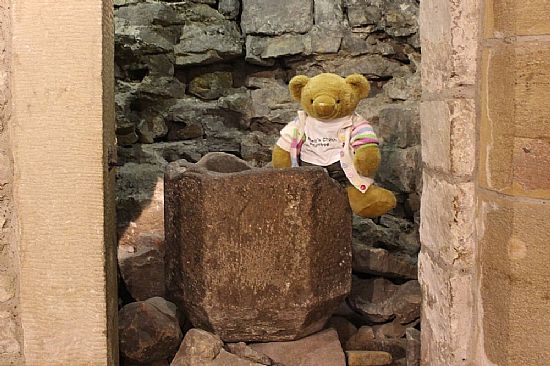 This is Lancaster Priory church, which is dedicated to St Mary, so I made sure to visit it (despite Lancaster having a very annoying one-way system). Because it's such a big church, Uncle Les wanted to get a lot of it in the photo - it means I look very small sitting beside the sign on a stick. I am NOT small, I am BIG Ted.

It’s a very big church and has two fonts – one with a big pointy lid, and another in an alcove; I sat near or in both, of course! [The font “in an alcove” is a Saxon font dating from the 7th Century, Big Ted]. I couldn't sit on the main font (see photo left) 'cos there was a big pointly lid with nothing for me to hang on to, so I wedged myself in between a noticeboard and the font - this is really not one of my better photos. The photo on the old font is MUCH better.

There was also a castle next to the church, but I couldn’t see much of it ‘cos there were trees in the way. 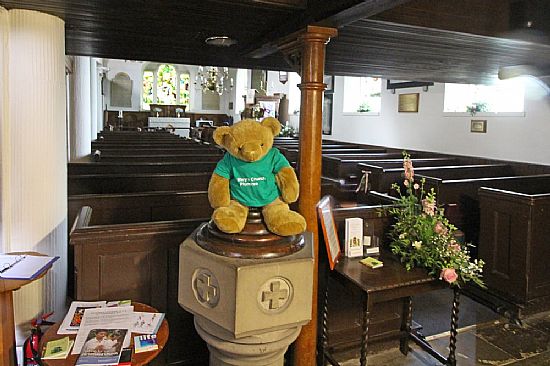 I had to sit on a rubbish bin; well really, what a cheek - at least they put a bag under me to keep my bottom clean! But getting photographed by the church sign was worth all the trouble - look how bit it is!

This St Mary’s had a steep path leading down to it which my assistants found rather tricky [It’s not easy carrying a bear in a bag because he doesn’t want to get wet plus all the camera paraphernalia needed to capture his “splendid fur”, Big Ted].

I had a look round inside, and sat on the font (as you do). There's a balcony in this church which is unusual.

I sat on a sign for a "Peace Garden" outside this St Mary's. I didn't fancy sitting on a shrub nearer the sign / noticeboard 'cos they were all very wet (I've mentioned before about the unsatisfactory connection between my splendid fur and dampness).

The church was shut, but I had a look around. I couldn't find the peace garden the sign was pointing to, but I did find a headstone for a chap called "Driver Driver", which I thought was a bit silly (I wonder what he did for a living; he was prob'ly a grocer [snigger])! Apparently, Trawden is noted for this and there were other chaps with doubled-up names such as "Smith Smith", and "Bannister Bannister". I'd be called "Ted Ted", which is just ridiculous!