I've just come back from a whole week away. It's been terribly thrilling. After so long stuck on a chair in the sitting room and not getting out to see people it was quite a dramatic change.

But I took it slowly. I decided [I'm not sure how involved you were in the decision-making process, Big Ted!] to revisit somewhere not too far away - Wirksworth in Derbyshire. I even stayed in the same cottage as before, which was really lovely. I got to ride in a railway carriage pulled by a steam train, and I visited three churches (two of them I'd visited before, but I wanted to show off my new T-shirts). 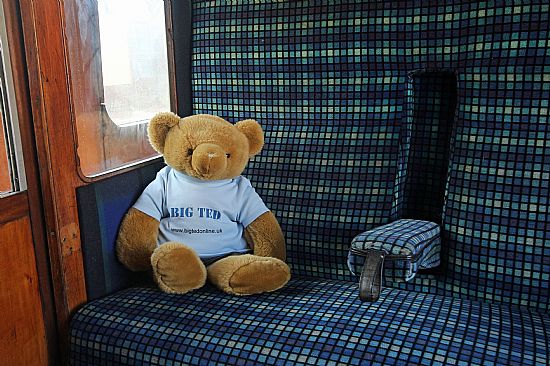 The railway bit was on the Ecclesbourne Valley Railway from Wirksworth to Duffield and back again (it's 9 miles long, and is Derbyshire’s longest heritage railway). We had a compartment all to ourselves which made it very exciting and I could explore as much as I wanted. Here's a picture of me after I'd quietened down a bit (it was all so exciting). Uncle Les tried to take a photo showing how fast we were going but it turned out making me look blurry and I couldn't have that. He's got a nice one of the steam engine though.

At Duffield the engine somehow changed ends and we went back the other way, which was a bit confusing. It was a sunny and very hot day so we had all the windows open and on the way back, 'cos we were much nearer the engine, we got a bit sooty and smutty [snigger!].

I visited three St Mary's churches: Mapleton, Tissington and Denby. I'd been to the first two before (numbers 269 and 268), but I thought that since it was sunny and I was wearing my new T-shirt, it would be a good thing to re-visit them.

Denby was a new one (number 323); I couldn't go in it, but I examined the noticeboards (plural, please note) and found the best one for a photo. Uncle Les needs to do a bit of work lightening it up so you can see ME (I think he's out of practice)!

I'll write about my visits on my Derbyshire churches page (after I've had a little snooze).