August 2021 has seen me out and about again - Hurrah! I've been to lots of new St Mary's churches and even visited a new county called Bedfordshire. I've nearly finished writing about them all but thought I'd do this bit to keep you in suspenders.

I stayed in Stroke Bruin again, beside the Grand Union canal and watched lots of boats. [It's Stoke Bruerne as you well know, Big Ted] One boat tried to turn round where there wasn't enough space and nearly got stuck. They then had to go through the lock, through another lock, and a long way down the canal before they found space to turn round and come all the way back. It took ages (and was very funny!).

As I said, I visited lots of St Mary's churches in Oxfordshire (1), Northamptonshire (5), Buckinghamshire (4) and my new county Bedfordshire (5). I think that makes 15 new ones!

One of the churches I visited was in the middle of a place called Stowe Park. I had to walk for AGES to get to it [I seem to remember that you were carried all the way and didn't do much walking, Big Ted]. 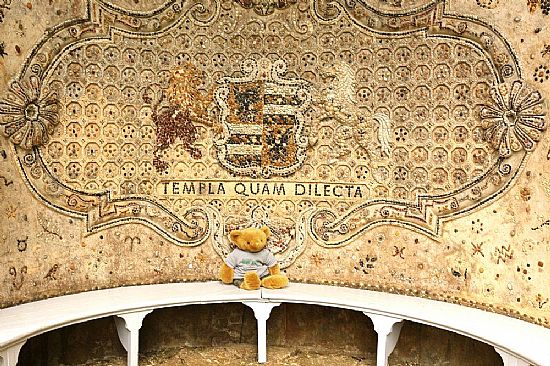 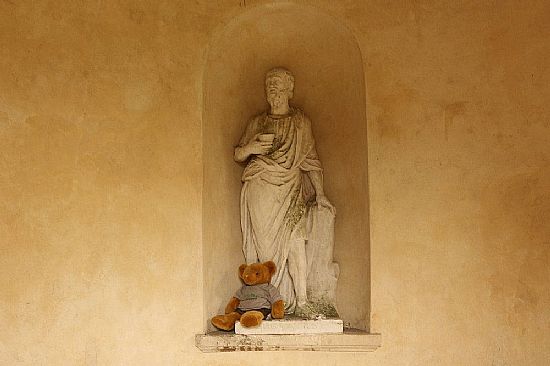 As we walked through the park, we stopped from time-to-time and I had my photo taken in all sorts of strange places including in a pebble alcove (see left). The words above my head form the motto; ‘Templa Quam Dilecta’, meaning ‘How lovely are thy temples’. Which is s'posed to be a big joke on the fact that the family who built Stowe Park was called Temple and they built lots of temples in the park. (Frankly, I think MY jokes are funnier). 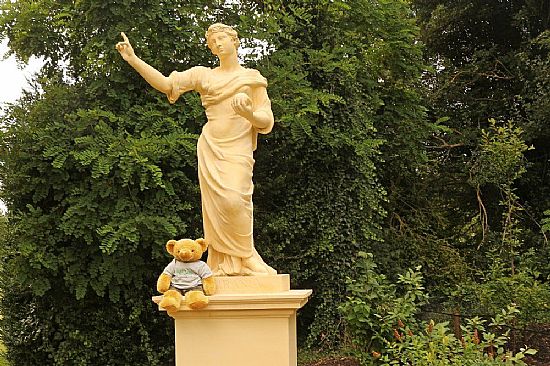 Finally, I sat on a muse called Urania (see left). She's the Muse of Astronomy and is a nice colour that sets off my splendid fur.

I was going to sit on a diff'rent muse but she wasn't dressed properly and I thought it would be rude to sit on a nude muse (but it was also very a-muse-ing). [That's quite enough, Big Ted]

(You can click on a picture to see a bigger version.)