There were some horrible roadworks too and the SatNav lady kept telling us to "If possible, do a U turn" which got really annoying. It was also very rainy at times.

Click on a picture to read a bit more about the church (and maybe see more pictures of me!). 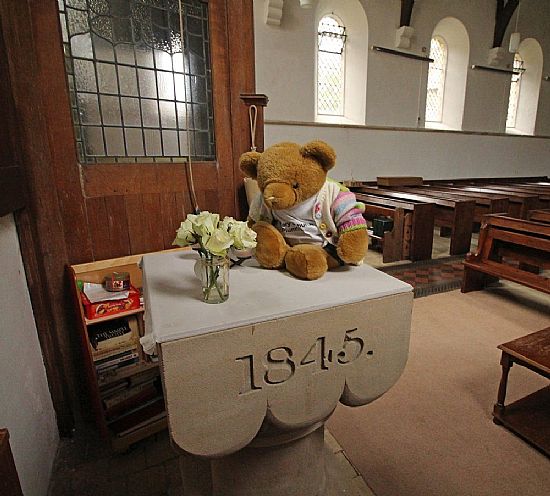 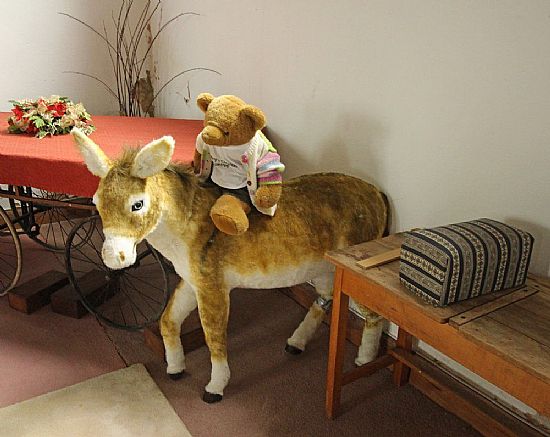 This is a lovely little St Mary's. It is quite plain compared to some I have visited. It has a nice square font made in 1845 - it has the date on the side so you don't forget it. There is also a donkey here - it is really quite big so I had a ride on it (it seemed quite friendly).

They're having building work done at this church so I couldn't go in. But I looked round outside. The notice board didn't say much, or if it did I couldn't read it 'cos the glass was all foggy.

There wasn't a sign or a notice board here - but there was a pair of owl gateposts which were rather splendid, so I had my photo taken by one of them. The church was locked though. 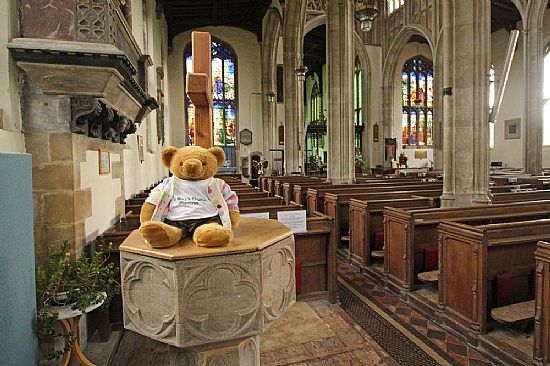 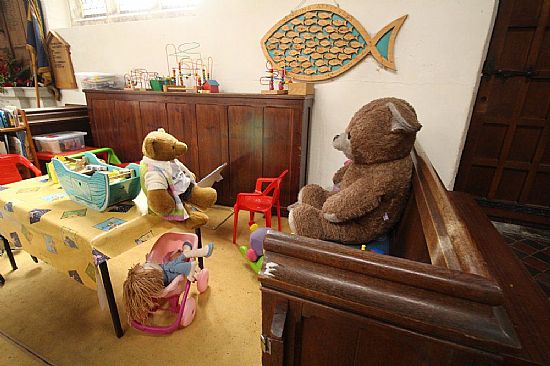 This St Mary's has a lovely big wooden cross on top of the font; it's just right for a bear to lean on when striking a pose for his photoshoot (snigger). The light in the chancel is all green from the old glass which makes it a bit spooky and there is a very funny pointy bit on top of the tower.

I also met a HUGE bear here, it was all rather scary so I kept my distance, but he was very polite and didn't growl at all. 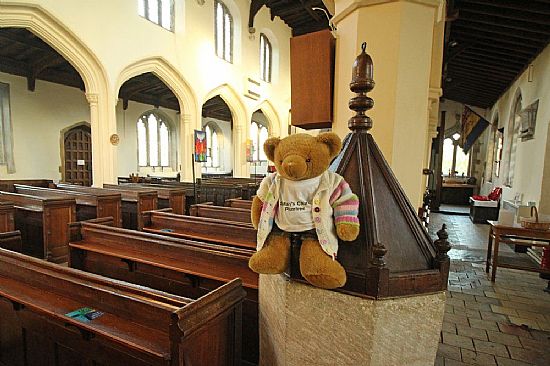 I got inside this church but I couldn't see the font at all. And then I suddenly spotted it hiding behind a huge pillar - that seems a really odd place to put a font. 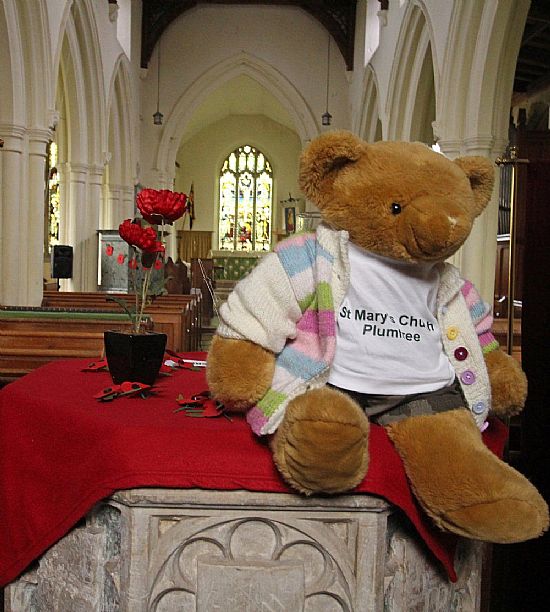 This is St Mary's in Dullingham, it has a very "dull" notice board [geddit?!] But it is rather nice inside. There was an arrangement on the font for Remembrance Sunday so I had to be extra careful not to knock any poppies off or disarrange anything when I sat there. 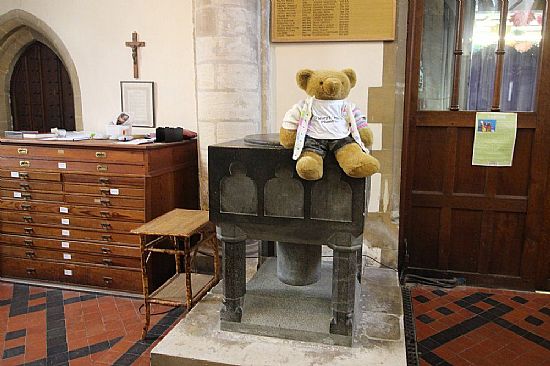 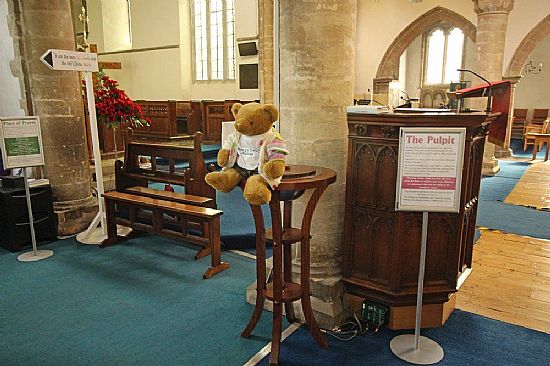 This is a really nice, big St Mary's next door to the Cathedral  and it's very welcoming. I met two people who were looking after the church and we had a good chat.

There are two fonts here (so I sat on them both) - one is at the back of the church, it's Victorian and very square, the other is modern, round, wooden and moveable (what a great idea)! 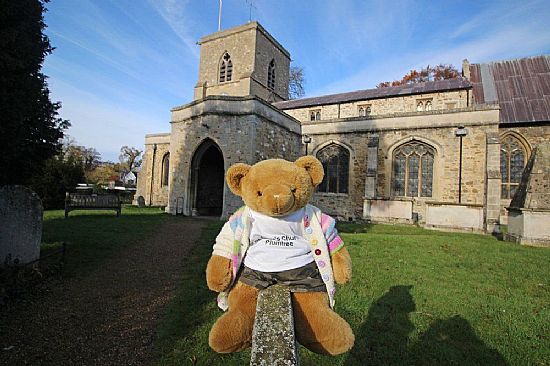 I couldn't get in this St Mary's, but I looked around outside and sat on a gravestone in the sun to have my photo taken in front of the church. 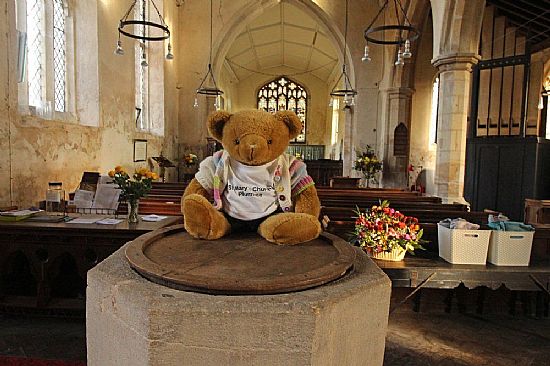 This church has a very plain font cover, but good for a bear to sit on (those twiddly bits can be very uncomfortable). It was a nice church but I think they have a bit of a damp problem and have to keep the windows and doors open so it was a bit cold as well. 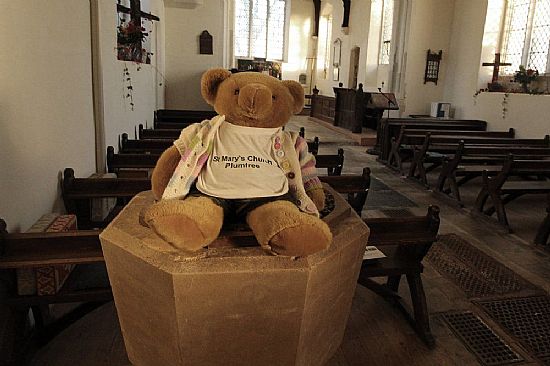 I like this St Mary's (except for the sign/notice board which is silly 'cos it mentioned Little Eversden but this is Great Eversden). They've been doing a lot of work inside the church and have a splendid toilet and other new facilities. They also have a Visa card donation thingy that I wanted to play with, but I don't think it had been fully installed 'cos it wouldn't light up for me.

There was also a child hiding under the altar which I thought was a bit odd!

Well really! This St Mary's was only about five miles from the previous one, but we got in a real tangle with roadworks and closed off slip roads. The SatNav lady was no help at all and we had to drive MILES out of our way. Then when we got here, we couldn't get in! It has a nice blue sign though - one of those handy multi-purpose ones with a notice board attached.

It was getting cold now so we just stopped here for a quick photo by the sign. Uncle Les got a good photo of me, the sign and the church through the gate - it's a bit squint though so he may have to fix it a bit (it looks much better now, he's done a good job). 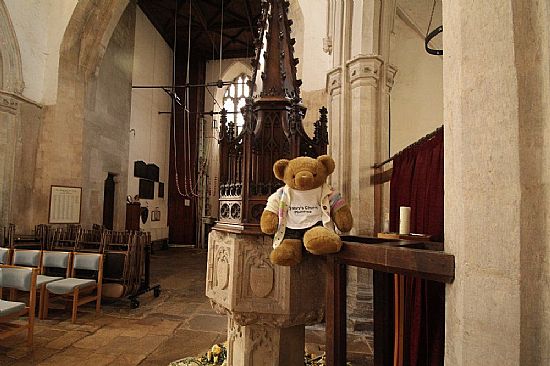 This is a lovely big St Mary's, but it has quite a tricky font cover - so I sat on some bits of wood holding it in place 'cos they looked safer [and certainly sturdy enough for a BIG Ted!].

There was a man here who was waiting to ring the bells. He told me he'd rung every set of church bells in Britain; I told him of my quest to visit every St Mary's church in Britain - he thought I was mad [and I think you will have to find new assistants if you want to complete your quest, Big Ted].

This village is also called Stow-cum-Quy but as I don't have any "Q"s yet I've decided to just call is "Quy" - also it's a lot shorter. I couldn't get into this church either, which is a bit annoying. 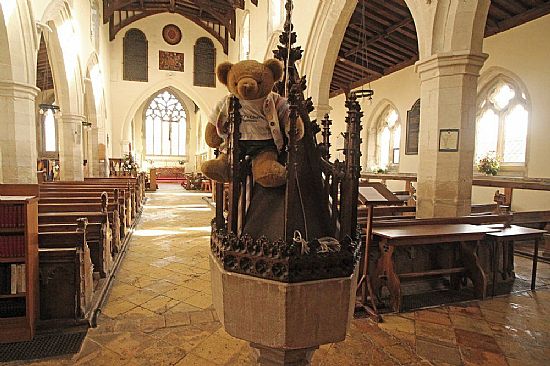 Another "levitating" bear photo to get a picture of me next to the sign - no handy wall or holly bush. I went inside here and found a splendidly twiddly font cover. I sat very carefully to have my photo taken - I think it turned out rather well! 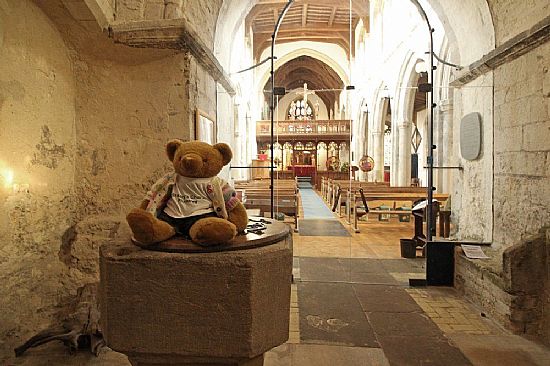 Well this is a funny place. There are actually two churches here, next to each other, and they don't seem to know why! They both have splendid towers. The other church is dedicated to St Cyriac & St Julitta (according to my sources, she was his mother) and is looked after by the Churches Conservation Trust (you can even camp overnight in it!).

I had a good look at the noticeboard and then I visited St Mary's (the church on the left). It was very nice inside; the font was inside the porch and there were lovely glass doors to the main bit of the church. 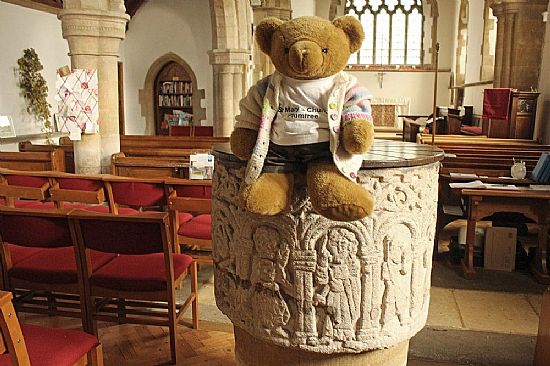 I visited this St Mary's "en route" to my holiday near Cambridge. (Are you impressed with my language skills? I am!). Wansford is currently in Cambridgeshire but it has moved about a bit [the north half of the village - containing the church - was in Northamptonshire and the south side in Huntingdonshire, Big Ted]. The church has a lovely purply-red sign though.

I went inside to check out the church; it's a lot smaller on the inside than on the outside. But it has a lovely old font built around 1100, so I made sure to have my photo taken on it. 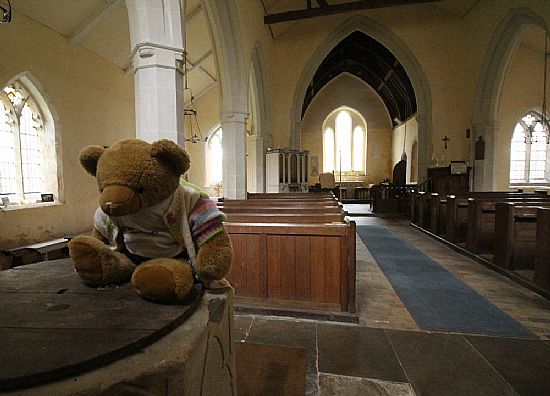 My 300th St Mary's. WOW!! And at a place with a very silly name (AND it's another "W"), AND you get to it through a farmyard. But there wasn't a sign for me to sit beside for my photo, so I swung on the gate instead. The church is actually called "St-Mary-the-Less" but I've decided it still counts!

However, the church was open, so I had a good look around (as you do). It's quite a big place and has chandeliers which have light bulbs; each chandelier ('cept two at the back) has another chandelier dangling from it with candles in - handy if there's a power cut I s'pose.