I've visited all these lovely St Mary's Churches in Cumbria and only one in Northumberland (so I've put it at the bottom of this page for now - if I go back and visit more I'll give them their very own page). Click on a picture to read a bit more about the church and see more pictures of me. 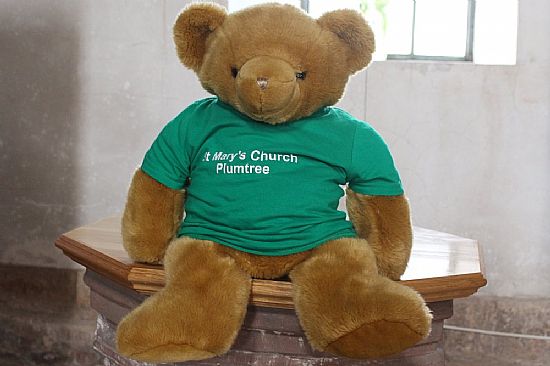 The nave of the abbey is the only bit of the original building left and is now the parish church, and called St Mary's. It has a font with a very nice lid, just right for bears to sit on.

The building was nearly burned down in 2006 but it's been restored with new roof timbers. 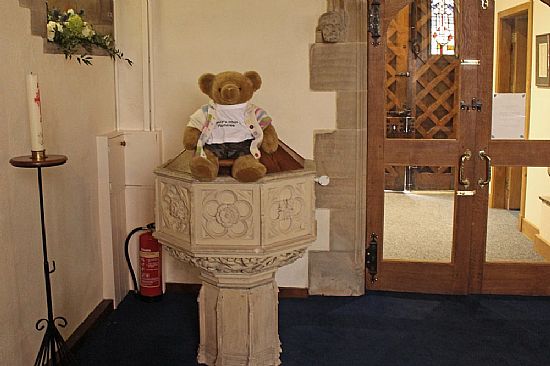 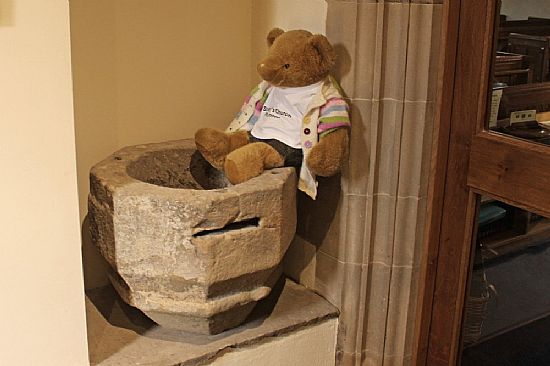 Isn't this a lovely sign, with a noticeboard and a handy roof. This was the last St Mary's I visited in the area and, what's more, it was open and I met the Vicar - a very nice man.

They were getting ready for choir practice so I could only have a quick look around and sit on the fonts (the main one is on the left here), but it was very good to get out of the rain. There is also an old font in the entrance area, so I sat on that too. 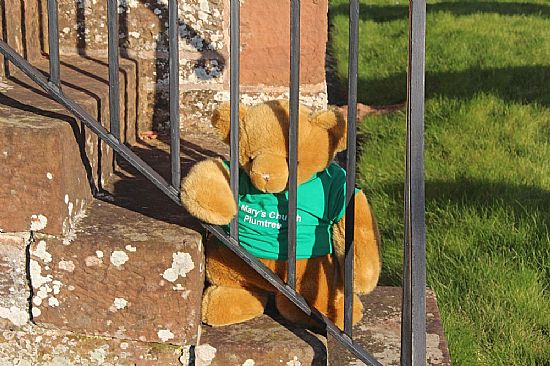 Whoops! I forgot to add my notes for this one. I wonder what I did at this St Mary's?

I've found this photo though, so I obviously couldn't get into the church, but it was very sunny outside.  I played around on the steps outside the church (I do that quite a bit). 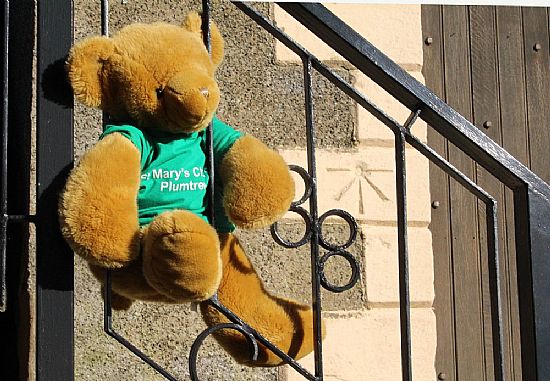 I got a bit confused here 'cos I thought this village was called High Hesket, but the sign says it's "Hesket-in-the-Forest". I really think they should sort that out.

I went inside this church and said "Hello" to some nice men who were putting in a new heating system.

There were some steps outside the church which had some railings - of course I got stuck in them. The funny mark in the wall behind me is 148.87 metres above sea level (I bet you're impressed with that!). To find out more go to this website. 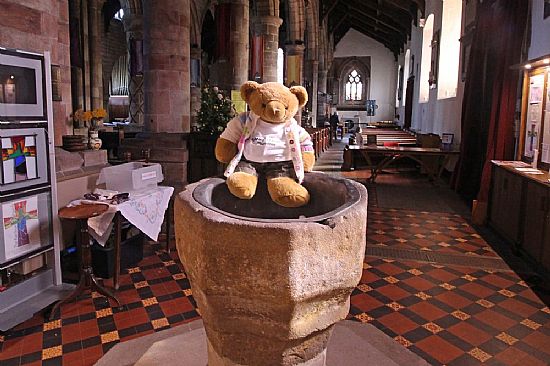 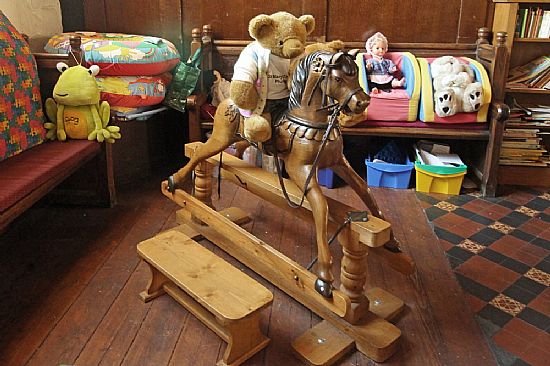 It's nice when the place you're staying in has a St Mary's 'cos you can drop in a couple of times - which is just as well because Uncle Les "forgot" to take my photo by the church sign the first time I visited. This church is part of the "Rainbow Parishes" 'cos it was one of seven churches, but then they added another church so it's the only eight coloured rainbow!

This is a lovely big church. It has some huge pillars (much thicker than the ones in my St Mary's) and some of them have lines carved into them. It also has a lovely font that I sat in (I made sure it was quite dry first).

I also had a ride on a rocking horse in the children's area. This was great fun. I think I've been on one of these before somewhere [You have. It was at St Mary's in Edwardstone in Suffolk, Big Ted]. 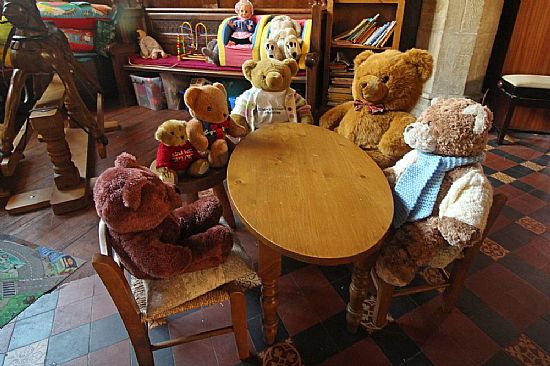 And then I met the bears! Well, I've never met so many bears all at once. I was a bit scared at first, 'specially 'cos of the big one (he's a BIG, Big Ted - snigger) but he turned out to be really friendly and we all sat round a table and had a good chat about bear-related issues. 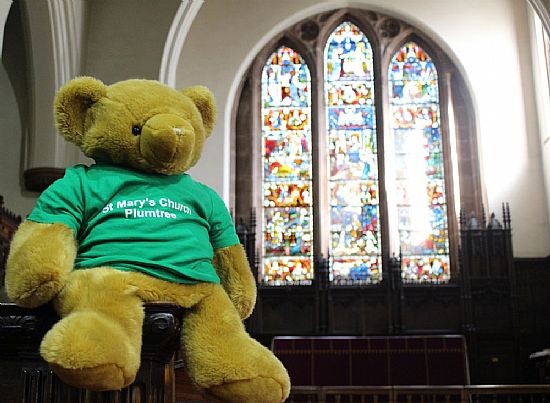 Obviously, the church in Maryport is dedicated to St Derek [snigger]! No it isn't, it's another St Mary's.

The church is really big, it's the biggest building in the town, and so they use it for concerts and all sorts of other stuff. A very nice man showed me around.

This church also has a really nice window at the east end as you can see in this photo.

I couldn't get into this church and as it was wet I had to sit on my carrying bag to get a photo - at least this St Mary's has a sign and you can just about see the name of the church on it (but it does have a handy wall for a certain bear to sit on).

St Mary's church in Walton has a really comfy wall for bears to sit on, unlike some churches I could mention. 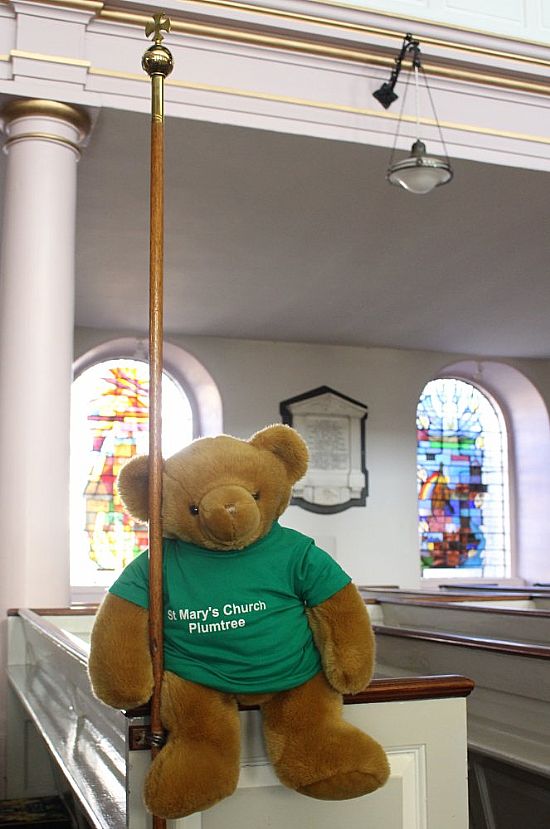 This is a really bright church. It has lots of box pews all painted white. It also has a gallery for people to sit upstairs. I wasn't allowed upstairs 'cos I might have fallen over the edge. As a veteran bungee jumper I'm quite used to heights now.

The church has four new windows that were put in by the broadcaster Mr Melvyn Bragg who was brought up in Wigton and went to school here. They are in memory of his family and are very pretty. You can see two of them in this photo of me.

You can also see I'm holding another "churchwarden's staff" in this photo and Uncle Les has managed to get the top bit of it in (I think he's been practising).

Another St Mary's I couldn't get into - well, this is just not good enough (and my researcher says it was s'posed to be open). But it does have a very good sign and only a slightly damp wall. There was one of those incidents shortly after the photo was taken - Auntie Fiona says I wriggle and that's why I fall off walls; I don't think that could be the case at all, I don't think I am placed on walls with sufficient care as befits my role as a Roving Ambassador! 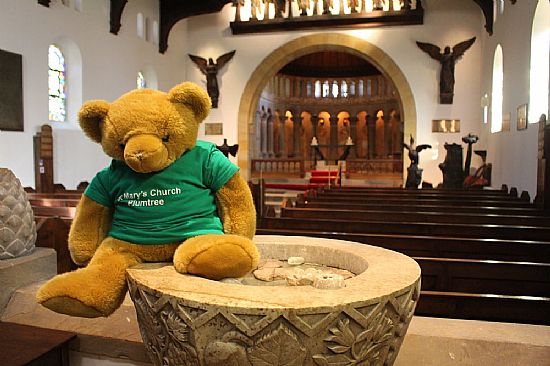 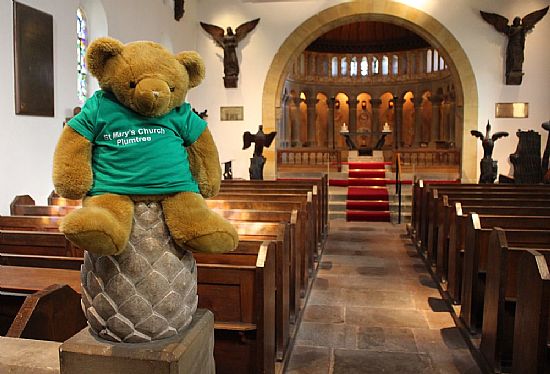 A holly hedge! Well that's not fair on a bear with a very tender bottom (or "Wreay" [snigger]). But despite the holly hedge by the sign, this is a really lovely church.

I went inside it and found that it has an apse (this means the building has a round bit at the altar end) with little niches in it. The church was designed by a lady called Sarah Losh between 1840 and 1842.

Look! Here's me inside the church sitting on the carved font and also sitting on a large stone pine cone! You can see the apse behind me in both photos. 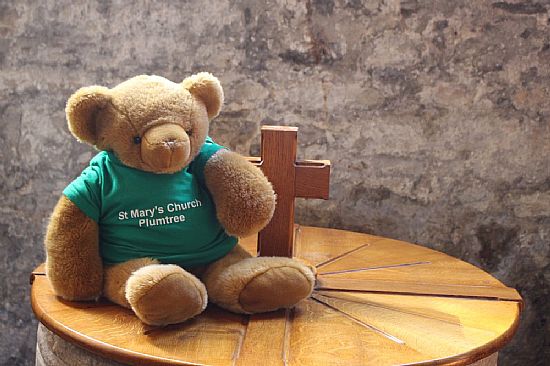 This church was another abbey that had become the parish church.

Blanchland Abbey, was founded as a "premonstratensian" priory. That long word means that the people who started the abbey were a Roman Catholic religious order of canons regular founded in Premontre near Laon. That doesn't help much either does it? I thought canons were something to do with guns. Anyway, the abbey was founded in 1165 and is in a very pretty village.

The abbey was dissolved in 1539 (by that naughty King Henry VIII). The Parish Church of St. Mary the Virgin was built in the 19th century using the bits of the abbey that were still standing.