I've now been back to Derbyshire (I said I would) and have added seven more lovely St Mary's churches to this list. Now it's 2021 and I've added another (Denby, number 323, if you're keeping count)! 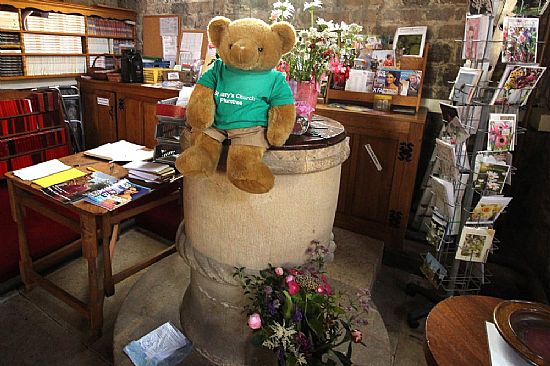 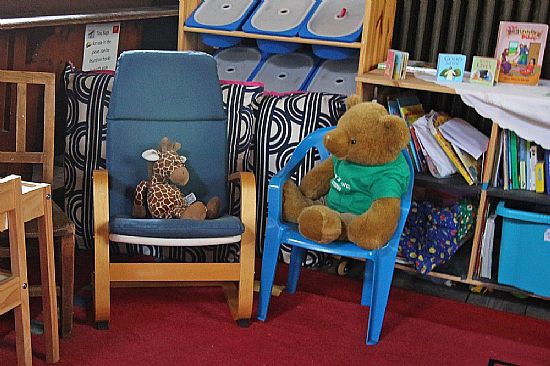 Another lovely St Mary’s to look around. I had to be very, very careful sitting on the font as there were lots of flowers on it. Once I’d clambered up I sat very still while Uncle Les took my photo.

I met a stuffed animal in the Children’s Corner here (I think he was a giraffe, but I didn’t like to ask – it’s rude) [that doesn’t usually stop you, Big Ted!]. 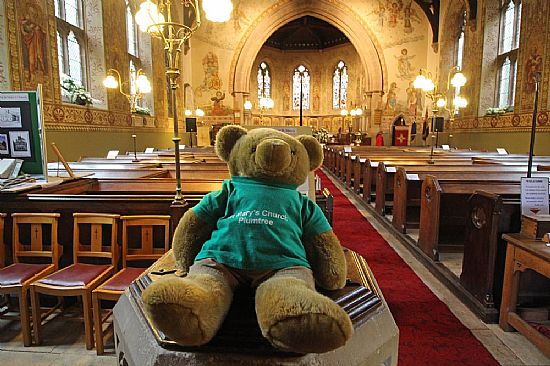 I had to wait about here for ages for the church to open. I was in my transport bag (it’s an M&S carrier bag that’s seen better days – I really should be carried around in something more elegant.) [Well you do insist on being out of the rain, and it’s what was available, Big Ted].

Anyway, when I got inside, I found it was well worth the wait – what a lovely St Mary’s and it has some splendid pictures on the walls (you can see them behind me in this picture). The church was built by some mill chappie and he did a very good job. [St Mary’s, Cromford, was built by Sir Richard Arkwright the industrialist and inventor. He died before the church was finished, but the building was completed by his grandson, Big Ted.]

Denby was a new St Marys for me (number 323); I couldn't go in it, but I examined the noticeboards (plural, please note) and found the best one for a photo. However, Uncle Les needed to do a bit of work on this photo, lightening it up so you can see ME!

There's a school next door to the church and there's a big pottery place near here too. Auntie Fiona and Uncle Les went there shopping and seemed to be gone for an unreasonably long time - I think CAKE may have been involved! 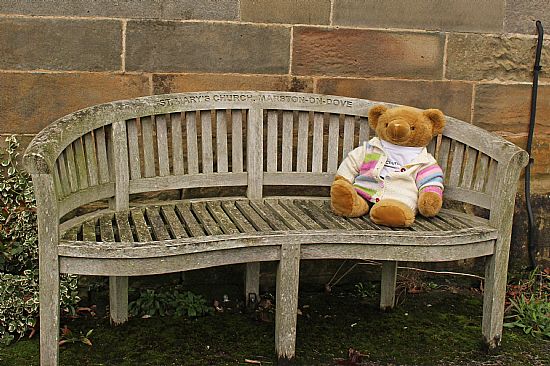 The SatNav lady didn't know where this village was so it took some finding. This St Mary's has a car park though, which was handy. It also has a splendid noticeboard - I like that it's green, it makes a change from boring blue! You see how I'm precariously balanced on a rail? Well, shortly afterwards there was an "incident", I may need to have a bath!

The church has this rather splendid seat in the churchyard too. I had a quick sit down on it, but the weather was rather too chilly and damp for a serious snooze. 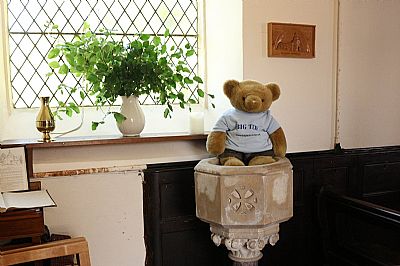 I liked this St Mary’s 'cos looks different to most of the ones I’ve visited. [It was built in the 1850s and designed in an Italianate style by James Gibbs, who was a friend of Christopher Wren, Big Ted]. I sat in the font for my photo ‘cos it didn’t have a lid (it was empty though).

I came back here in 2021 to show off my new T-shirts. Sadly, nobody was here to see them so I asked Uncle Les to take new photos instead. It was nice and sunny by this window.

Phew! Another St Mary’s in Derbyshire (I thought I would only ever have one). [This only makes sense if you are reading these comments in number order, Big Ted]

This is a derelict St Mary’s (which is always very sad). I sat on the greenery on a wall for my photo (dodging some very smelly Cow Parsley).

It was a St Mary’s Mission Church, but since it didn’t know whether it was in “Saw Mills” “Sawmills” or “Ambergate” I can see why its mission failed!

Update January 2021: The church is now for sale as a house! There's not much garden. 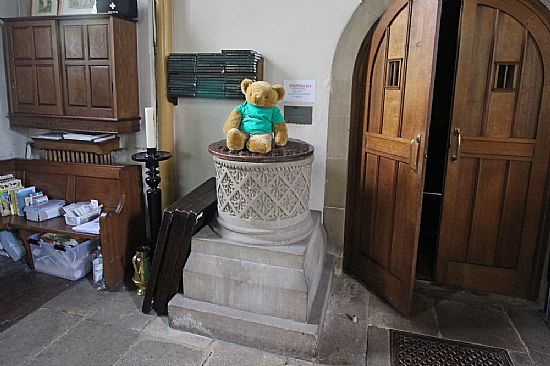 My last St Mary’s on this visit. We didn’t know if it would be open, but it was (hurrah!). It has a nice flat font cover, just right for a bear to sit on (no flowers to avoid or spikey bits to hang on to in a precarious fashion – that’s what I like). 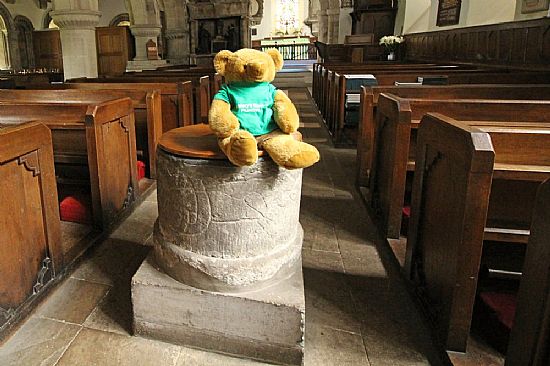 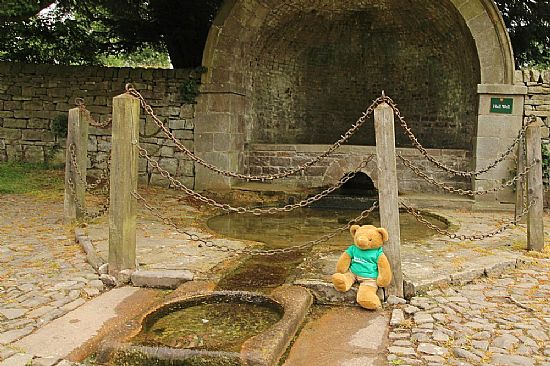 This St Mary’s is in a lovely village and sits opposite an old hall. It’s at the top of a hill, which made me puff a bit [It might have made you puff if it wasn't for the fact that you're carried everywhere, Big Ted].

I went inside and Uncle Les took my photo sitting on the old font. He also took my photo beside the well in the village. (I confess I was a little worried about getting my feet wet here.)

I came back here again in 2021, I couldn't get in but I had a new photo taken by the sign to show off my new T-shirts (have I told you that I've got new T-shirts yet?) [Many, many times, Big Ted!] 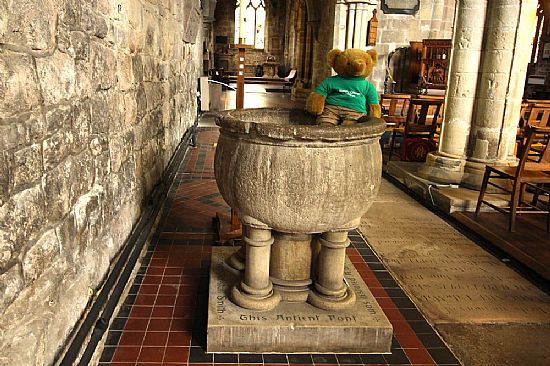 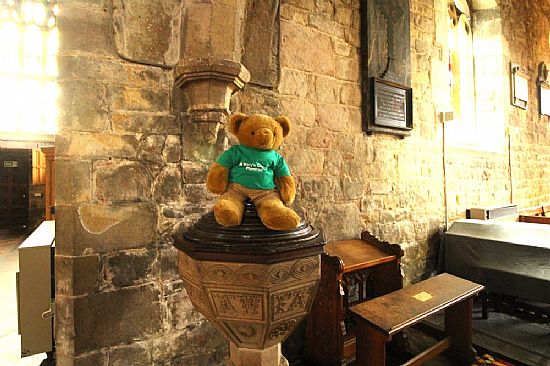 I actually came here twice. But the first time a big band was playing and I didn’t want to disturb them [It was the Derby Concert Orchestra practising for a concert in the church, Big Ted].

I went back and had my photo taken in one font, on another font and then sitting in something that looked like a font but prob’ly wasn’t. It’s a nice St Mary’s with lovely stained glass windows and lots of space.