I've visited all these interesting St Mary's Churches in Shropshire. Some of them are in villages that have very funny names. Click on a picture to read a bit more about the church (and maybe see more pictures of me!). 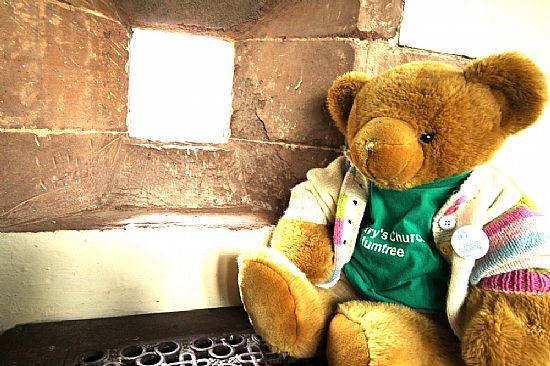 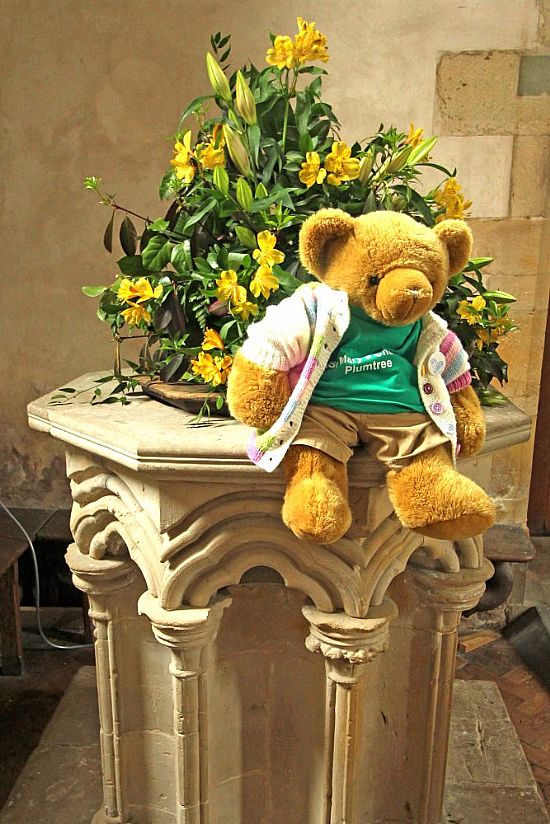 This is an old church with a leper's squint and a nice big font (of course I saw them both as a photo opportunity). I think Uncle Les made my splendid fur look rather more splendid than usual in these photos!

The churchyard has a national collection of old Narcissusses [it's Narcissi, Big Ted]. When I visited many of them were still in flower and they were very pretty indeed. AND there's bits of an old castle next door! 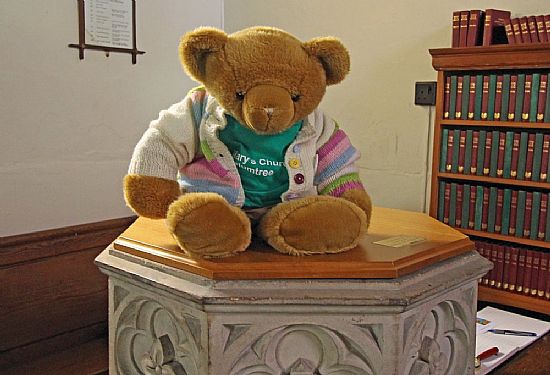 I had to sit on the grass to have my photo taken here as there was nowhere to perch and I didn't fancy levitating. Uncle Les then did some clever work in Photoshop to put me near the sign and make it look as though I was bouncing up and down on a trampoline (note to self: take trampoline on holiday next time [snigger]).

We went inside and there was a really nice font with a nice, flat cover on it - perfect for a bear to sit on.

I got a bit confused here: St. Mary's Broughton is on Church Road to Yorton Heath out of the village of Yorton. There doesn't seem to be a place called Broughton!

The church is down a windy road (that's wiggly not blowy) and sadly wasn't open for me to look inside.

Well really, the names of these places just get sillier! Apparently this St Mary's is part of the parish of High Ercall (that's not much better).

This is a funny church with a wooden bell chamber and spirelet (I think that's a name for a baby spire). We couldn't get inside the church so we just walked round the outside. 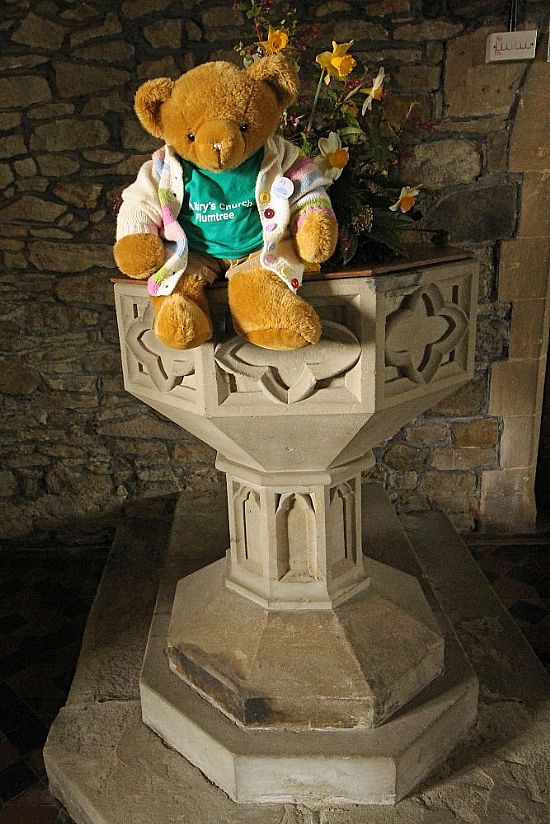 Another St Mary's and another notice board and a visit inside for a font photo. I had to be very careful so that I didn't knock the Easter flowers off the top. 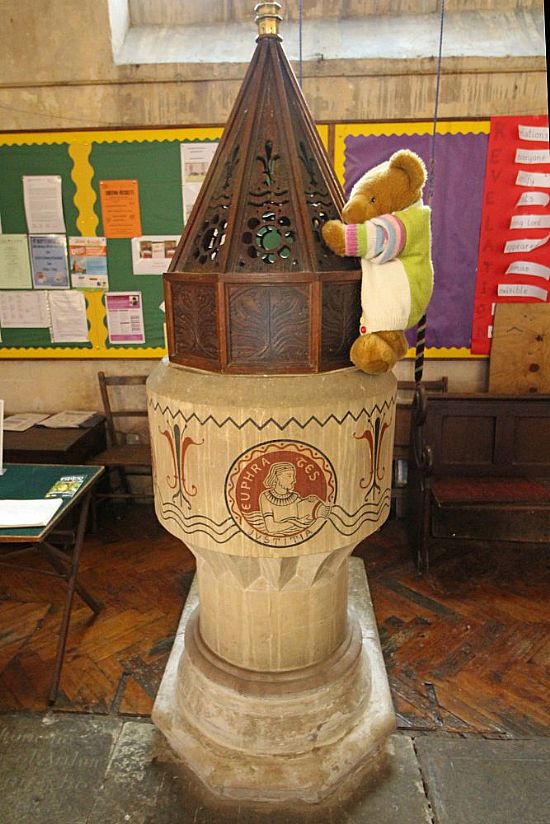 This church was open and so we went inside.

It has a very nice font with painted bits but it had a very tricky pointy cover on the top. I managed to scale the font and wedge both paws into the cover to have my photo taken. I had to hang on tight and was very uncomfortable, but a bear has to do his best for his art!

St Mary's in Ellesmere is a really big church. The Sunday School children were putting the Easter Garden together near the font (I visited on Good Friday).

Some nice ladies said "Hello" to me. They told me they'd won prizes for their churchyard and the wildflowers that grew there. We explained that I was visiting St Mary's churches and that this was my 70th; they seemed very impressed. 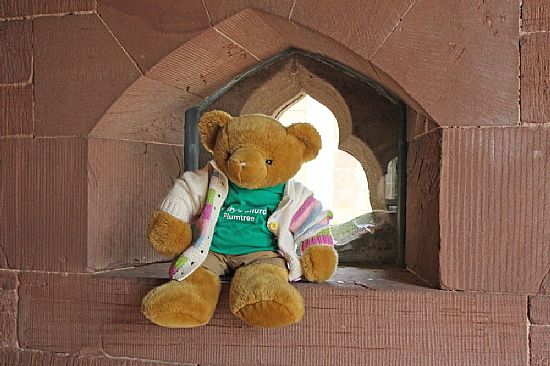 Uncle Les has got a new camera lens so you can see the church as well as the notice board and me in this photo of St Mary's in Hales. It's called a wide-angle lens. Little Ted said the wide angle was needed to get all of my feet and ears in. I think that's just rude.

He did manage to take this nice picture of me sitting by the window in the porch.

This is a little church, in a very little village, next to a farmyard. There are a lot of fences round all the bits of the churchyard – perhaps they have problems with visiting sheep. The church was locked though. 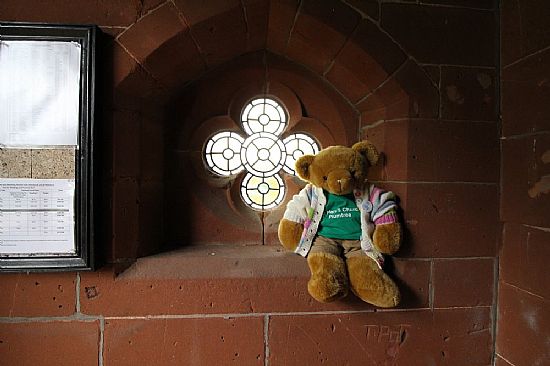 At St Mary's in Kinnerley everyone said "Hello" and asked about me and where I lived. Here I was offered coffee and a scone which was very nice indeed (they're served every Saturday from 10:30, if you're in the area). It was very welcome for a peckish bear.

There was another pretty window in the porch for me to sit beside. 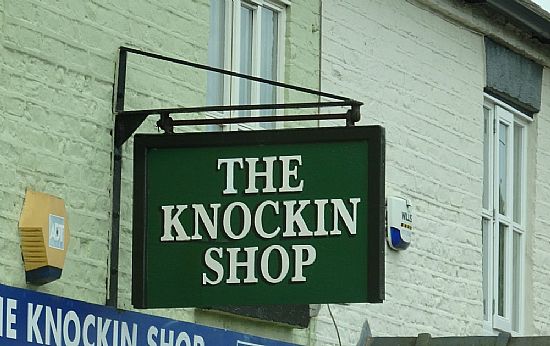 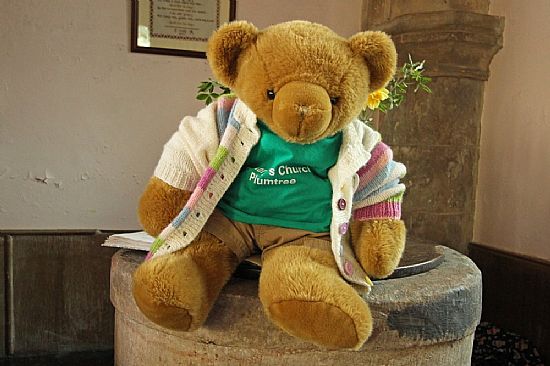 This St Mary's is in Knockin (snigger) where I met some very nice ladies who were doing the flowers. They shook my paw and said "Hello". One lady gave me a postcard of the church to take home.

They even have a shop in the village called The Knockin Shop (tee hee!). 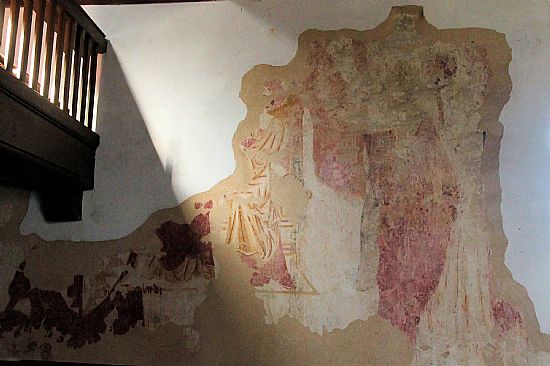 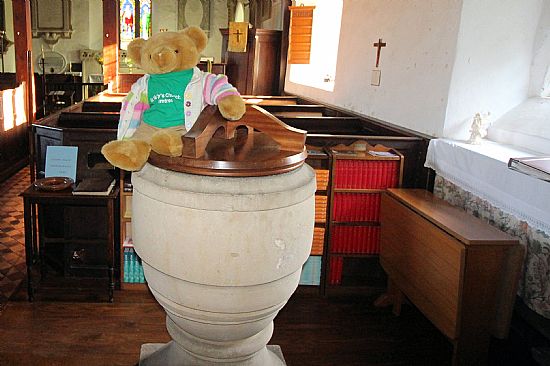 Another small church with a handy font and lots of box pews. This church also had some wall painting that was s’posed to be of the Nativity. I squinted a bit and sort of saw it. Uncle Les took a photo for me (see right) - can you see what it is?

This church also has a gallery, but you get to it from stairs inside. 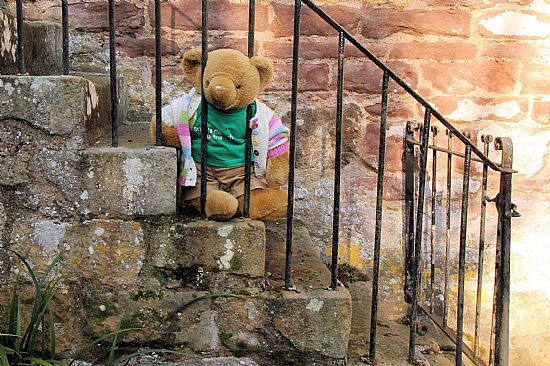 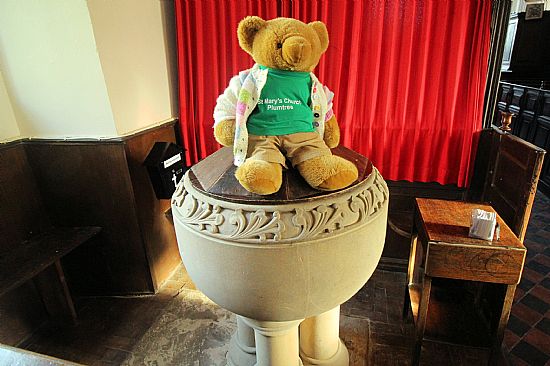 This is a small church with a handy font and lots of box pews. There were steps outside to climb up to the gallery inside. The steps had nice railings and I got my head stuck in them a bit (just to annoy Auntie Fiona!).

I couldn't get inside this church because there were workmen there. But I sat on some not-too-prickly plants to have my photo taken.

I think I look a bit small in this photo as well, Uncle Les must have been misbehaving again. 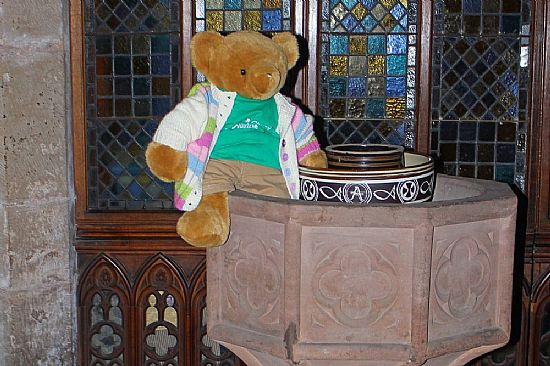 Muckleston is another silly name, isn't it.

This font had a bowl inside it, and then there was another bowl inside that one. Maybe it's a really leaky font! Uncle Les had to use the flash for this photo - that's why I look a bit startled! 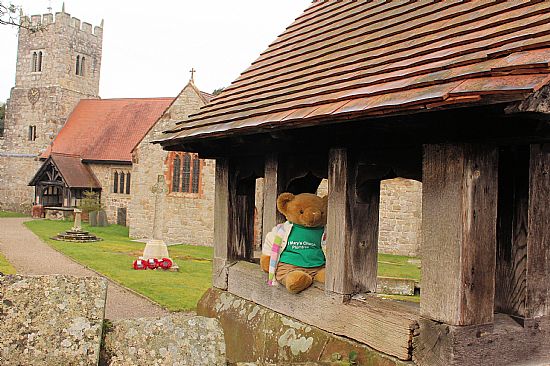 This looks to be a lovely St Mary’s from the outside, but sadly I couldn’t get inside. Apparently, it’s open April to October in the daytime – I visited in February, so I wasn’t altogether surprised!

It has a good sign and a rather splendid lychgate (so I took advantage and had my photo taken). 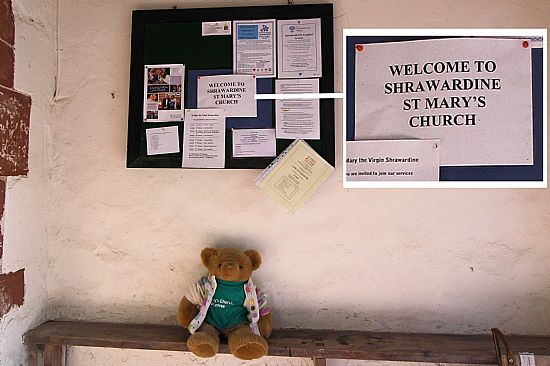 This St Mary’s didn’t have a noticeboard or sign (but the village does have a silly name), so I sat on the wall outside the church for my photo.

Then I went into the porch for another photo, just to show I really was here. The church was shut though. 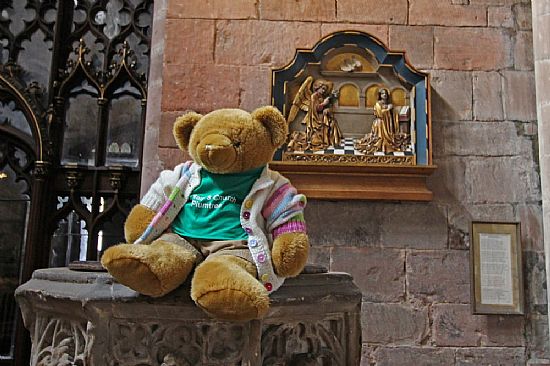 At this church I met a very nice lady who let me sit on the font to have my photo taken (and a very comfy font it was too, all carved around the side). This church is not used for services any more but it is looked after by the nice people at The Churches Conservation Trust (go to their website) - and they're doing a really good job.

Can you actually see me in the main notice board photo? I think I might have to have a quiet word with Uncle Les, after all I am the star of these pages.

Isn’t this a very nice sign/noticeboard for a St Mary's? It has a comfy, mossy wall in front which is just the right height for a bear to sit on – and wide enough to ensure he doesn’t fall off in one of his “accidental plummeting” scenarios! Sadly, I couldn’t go inside so I don't have any other photos. 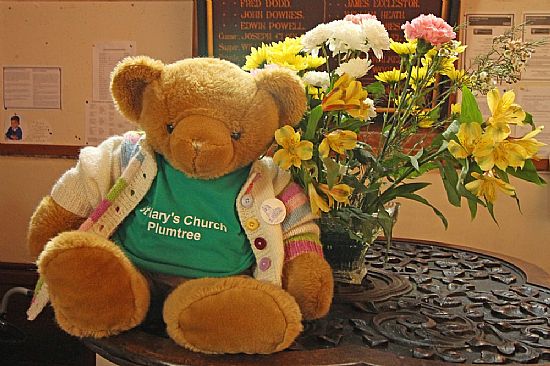 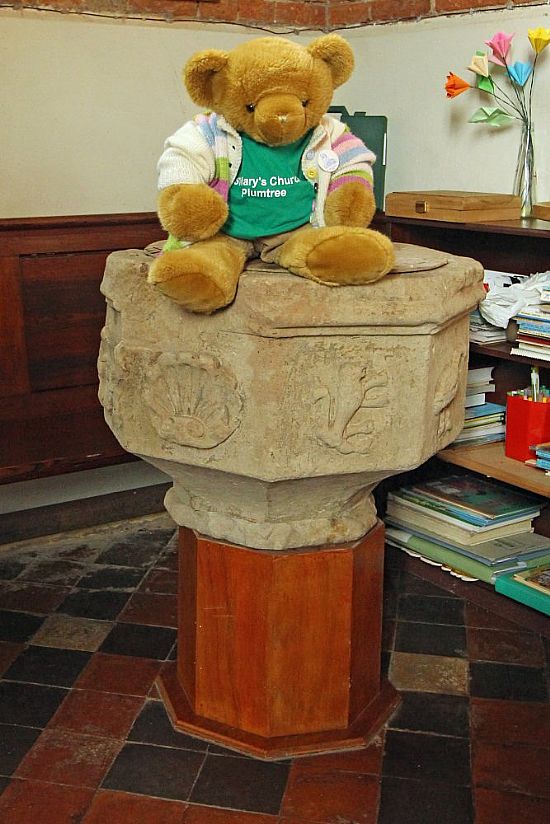 This St Mary's had a really good car park and three notice boards (the main one was rotten and the second one didn't say anything, so I chose this one 'cos it had a notice in it and the fence looked comfortable - it was).

I went inside and found two fonts (one much older than the other) so I made sure that I had my photo taken on both of them! 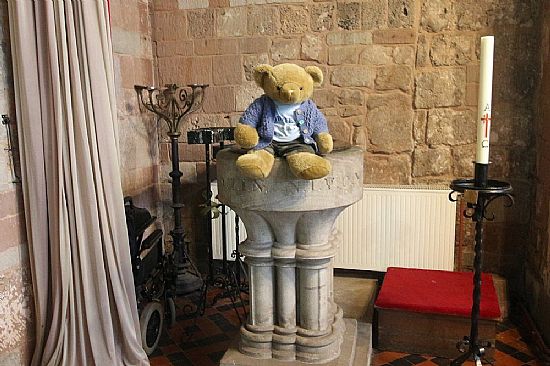 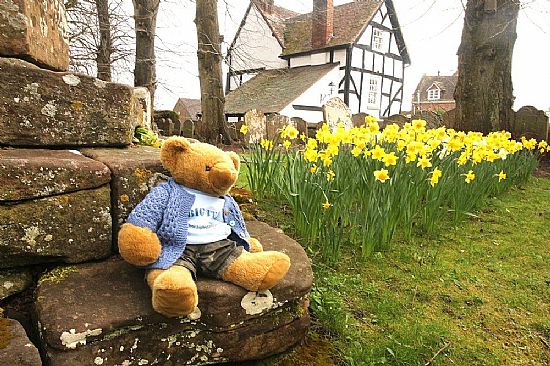 This church is in Shropshire (still not Worcestershire!). This church had lots of lovely daffodils in the churchyard and was open for me to look around [hurrah!]. I sat on the font which had a flat lid making it much easier for me. 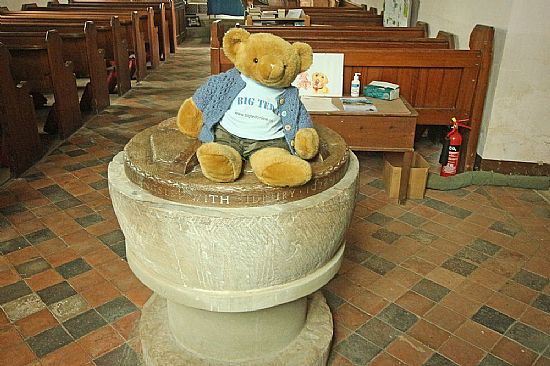 Again, no church sign but a nice porch with windows and stuff to read. 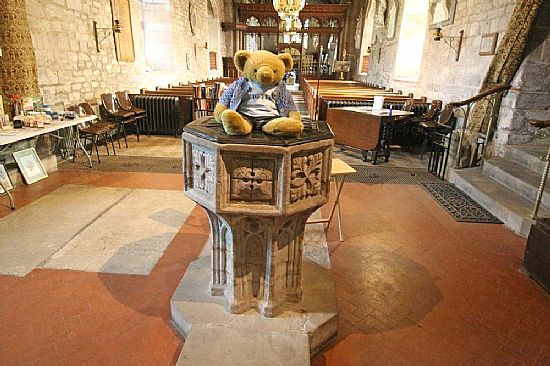 This is close to Tenbury Wells but is in a completely different county. The church had this lovely big banner instead of a church sign (it was a bit damp under my bottom though!). I went inside and looked at the font and sat on it. 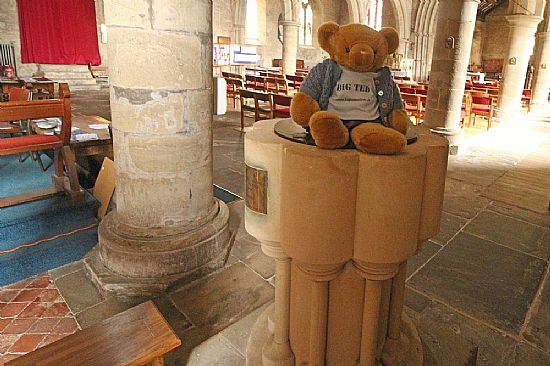 A lovely church sign that doubles-up as a notice board. Very handy if you want to read stuff. 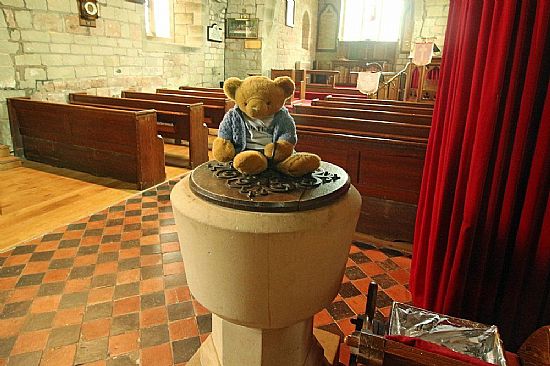 I sat on an adjacent wall for my main photo, it seems to work and Uncle Les has got some of the church in as well (that doesn't often happen). I went inside to look around.

What is it with this part of Shropshire and missing church signs? Nice wall though. 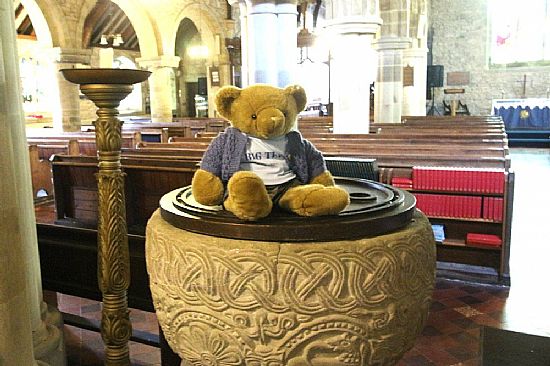 There was no church sign outside, but there was a handy music stand in the porch. So I sat on it for a bit.