I first went to Staffordshire in February 2019. I returned in 2022 (allegedly to find Worcestershire churches) and found some more Staffordshire St Mary's. Click on a picture to read a bit more about the church (and maybe see more pictures of me!).

This church made me cross. It was s'posed to be open, the website said it was – and the notice in the porch said so – but it wasn’t. 'Nuff said!

I was a bit grey in the original photo here. But Uncle Les did some of his magic and now I am positively glowing (must remember to enhance the splendid fur). Mind you, I had to sit on a wheelie bin for my photo ('nuff said).

Sadly the church is only open for visitors after Easter - I couldn't wait that long! 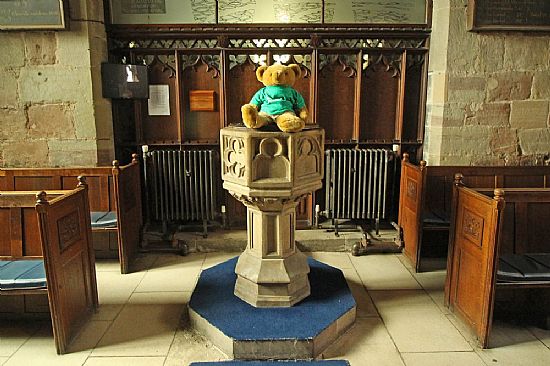 I liked this St Mary’s. It had signs outside saying it was open – and it was! I had a good look round and Uncle Les took a rather artistic photo of me on the font.

This is a nice little St Mary’s, but it wasn’t open (at least it didn’t pretend it was – unlike some other St Mary's I could mention). There were a lot of closed roads and diversions on the way here which was annoying (I learned some new words though). 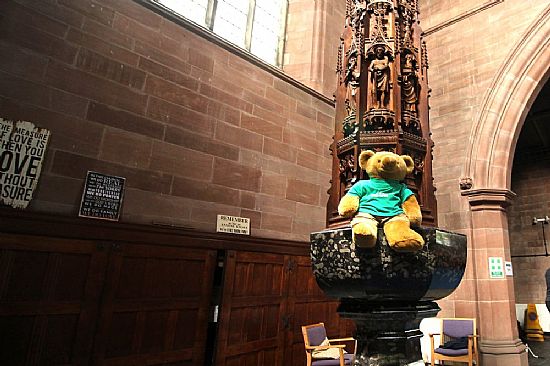 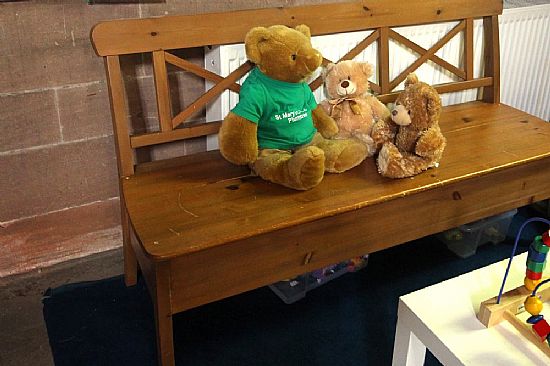 This is a nice big church. They had workmen in when I visited and they were having their lunch which smelled very tasty.

The font is really big and has a very tall cover – it’s one of those ones that is suspended from the ceiling and sort of floats over the top of the font. I had to be very careful sitting beside it as it wobbled slightly when I leaned against it.

I met two other bears here and we had a good chat about church stuff; I left them my visiting card so they can remember who I am [as if they could every forget you, Big Ted]. 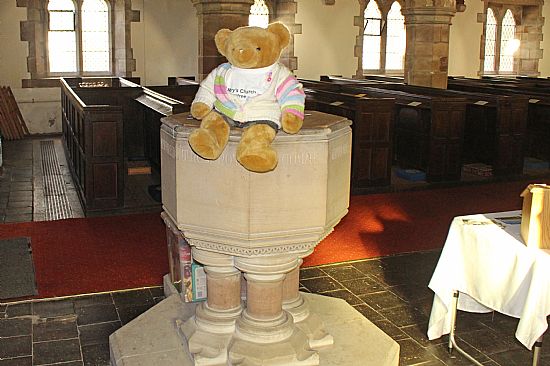 We nearly missed this St Mary's while driving through the village, and then it popped up behind us. Isn't that odd?! (I blame inattentive assistants - I was having a snooze and so couldn't be held responsible).

We got to go inside as well and we had a good look round.

This was another St Mary's that was hiding in a village. It's quite a big church, and we could see it, but we couldn't get to it in the car (I didn't want to walk 'cos it was raining). We finally got near and I had my photo taken but I'm not sure this is the proper noticeboard. 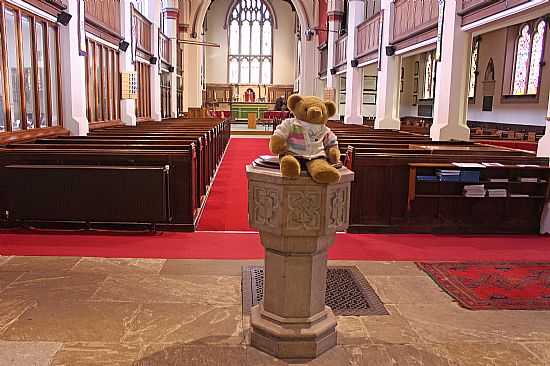 Uttoxeter is confusing - it has two St Mary's churches. This one (which is the main Parish Church) and another little one called St Mary's on the Heath (which I also visited). This church was lovely and friendly and I had a good look round.

This is the other St Mary's in Uttoxeter. It's really small and is called St Mary's on the Heath ('cos that's the bit of Uttoxeter where it is). It's right on the edge of the road (there's no pavement) so it's a bit tricky to visit.

My final church of the day and very hard to get to. It's on the edge of a dual carriageway and the cars were whizzing past very fast which I didn't like at all. I just got my photo and left.

I'm s'posed to be getting more St Mary's in Worcestershire, but they take me to Staffordshire instead [sigh!].

The church has a very ornate tower and a nice car park - but sadly, it was closed so I couldn't visit inside [They hope to be open again for visitors soon, Big Ted