And I've even visited a few St Mary's Churches in Wales (that's another country, you know)! Click on a picture to read a bit more about the church (and maybe see more pictures of me!). 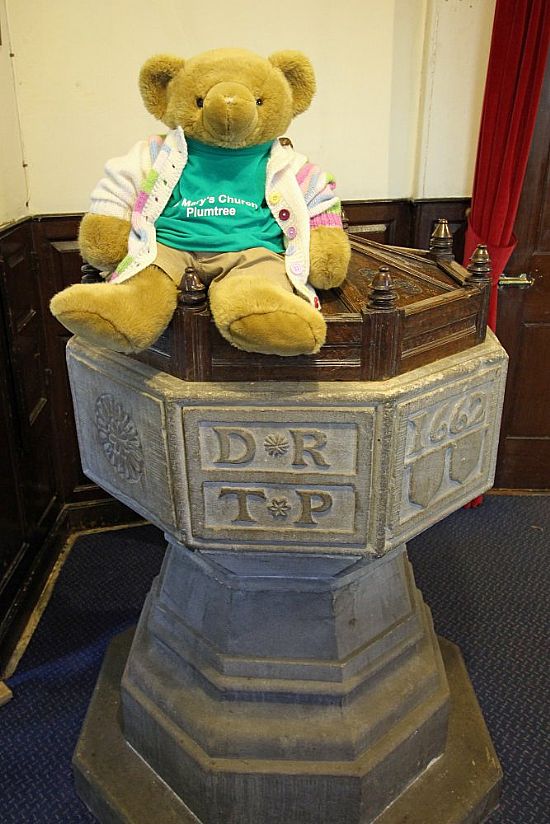 This is a lovely church (lots of stained glass and another comfy font) and I got a badge to wear.

As I was going out of the church I met the people coming back from the Good Friday pilgrimage. They were really friendly and one lady shook my paw and said "Happy Easter" to me. This is my first St Mary's in Wales (but, as you know, I've been to Wales before; I am a well-travelled bear). 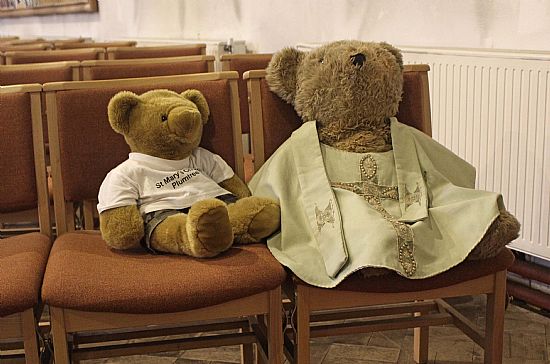 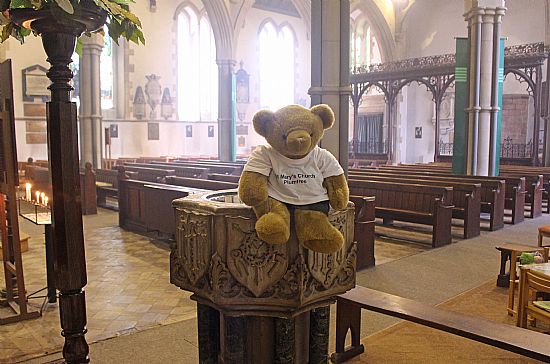 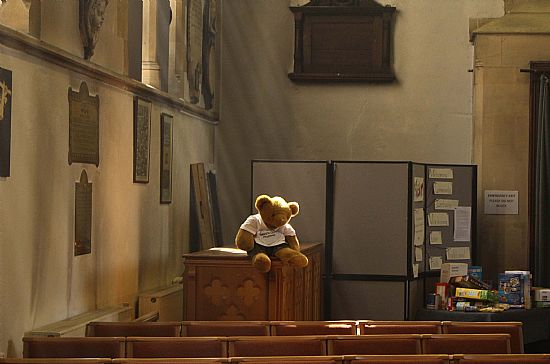 This is a reall big church and rather smelly inside! [It wasn't smelly, Big Ted; they had used incense at their Sunday morning service. You're not used to that.] But it was very nice all the same and made for an atmospherically misty sort of font photo. And then Uncle Les took this rather good photo of me sitting in a sunbeam.

I met another bear here who was wearing robes that had been made 'specially for him (I can't see Revd Trevor approving of that sort of thing - but the bear was a bit bigger than me and so I didn't want to cause a fuss). 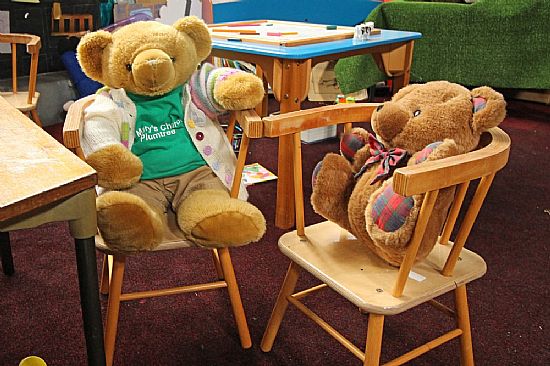 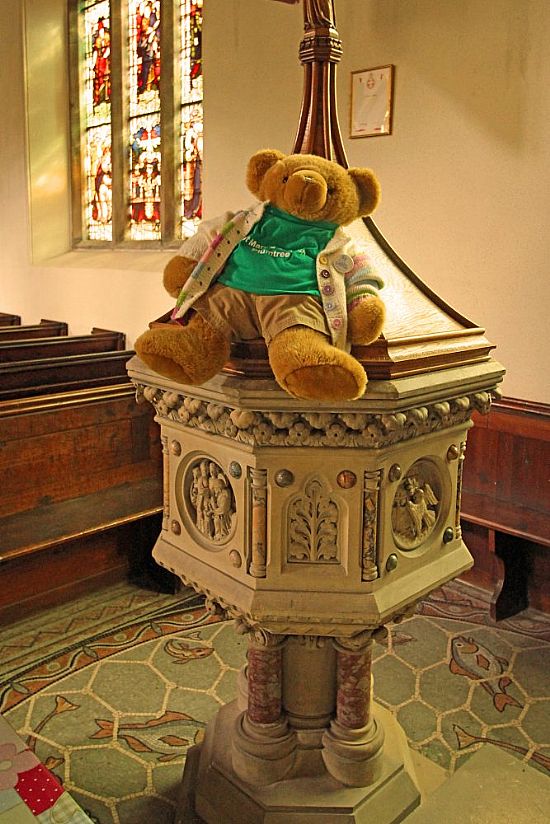 Outside St Mary's in Overton I thought the railings were rather pointy.

Inside I had my photo taken on the font which was tricky 'cos the lid had quite a slope and I kept sliding off. Then I had a chat with another bear, which was nice (mind you, he couldn't sit properly in his chair, unlike me!). 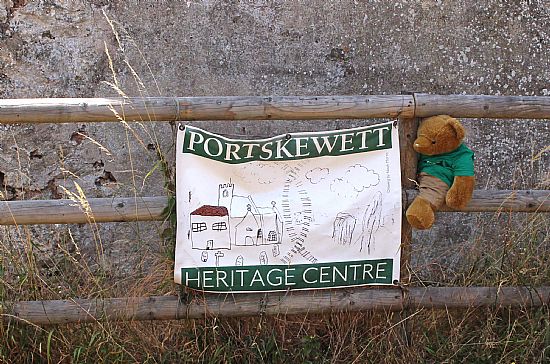 Another place with a funny name. I couldn't get inside this church so I wandered around outside. It was very hot and sunny.

I found this sign for a Heritage Centre, but it was outside a battered barn in the churchyard and there wasn't anything to see. [The Portskewett Heritage Centre is being developed, Big Ted. The "battered barn" is an old cottage that will be used as the heritage hub and visitor information centre.]

There was a Good Friday service going on at St Mary's in Ruabon and I didn't want to intrude so I looked around outside and had my photo taken near the sign. I couldn't possibly comment on whether some liberties had to be taken with Photoshop to get this photo to work (but I didn't sit halfway up the tower on top of the notice board!).

This church is a shared church which means it is both Anglican and Roman Catholic; that must take some organizing. 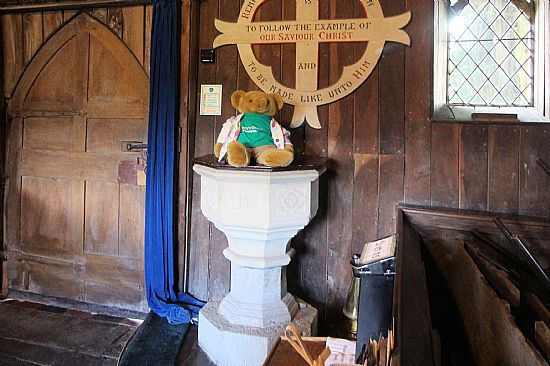 Another St Mary’s that’s located in Wales but is part of an English Diocese – Hereford this time – and it’s open (hurrah!). You have to open a gate and drive down a long track to get here, as the church is hidden by some trees in a field at the bottom of a hill.

This church doesn’t have a noticeboard. But it does have a little wooden bell turret and a gate that I sat on for my photo. I think they may have sheeps here ‘cos there’s lots of fences around the church to make sure they don’t nibble on the wrong thing.

I went inside to check out the font and have a good look around - there’s a lot of wood. [The church is unique in Wales as being wholly timber built, Big Ted]. 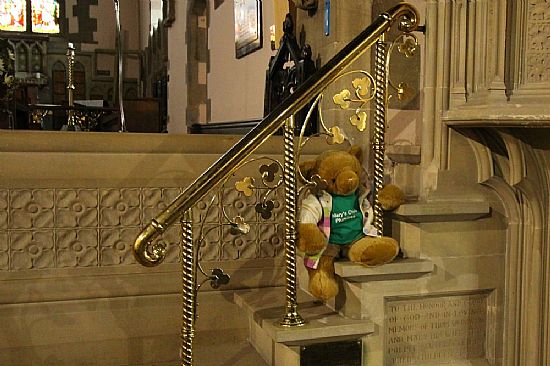 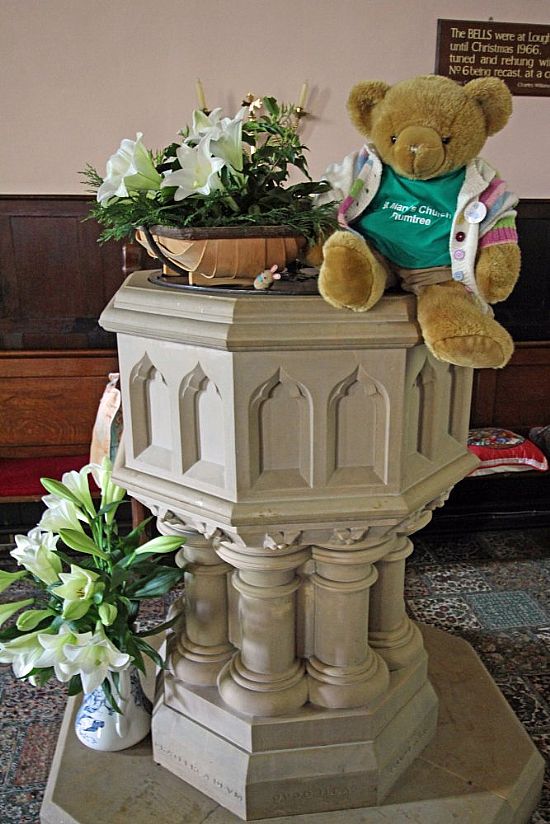 St Mary's in Welshpool is a really big church in the middle of a complicated figure of eight one-way system. I was driven past the church four times before I found where to park!

This has another nice font (and more smelly lillies!). I got a bit stuck in the rather nice brass rails leading up to the pulpit (well, I pretended to get stuck just to annoy Auntie Fiona [snigger!]). 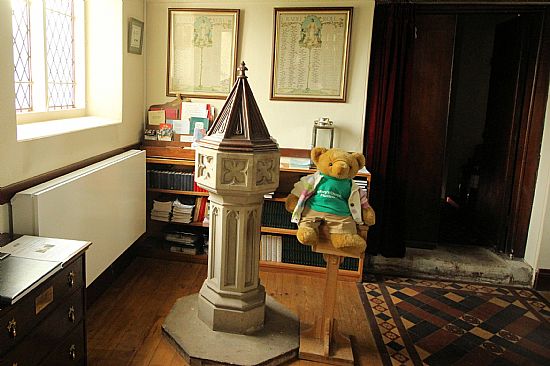 This is a lovely whitewashed church down a little lane. It was open for me to look around, which was nice. It has a very small font with a pointy lid and so I had to sit on the adjacent collection box for my photo.

The church is in the shape of a cross and has a lot of weddings ‘cos it’s so pretty. This St Mary’s is actually in Wales, but just to be confusing it’s in Chester Diocese, England (I’ve put on my “Wales” page ‘cos that makes sense to me).