I've also visited St Mary's Churches in Warwickshire. Click on a picture to read a bit more about the church (and maybe see more pictures of me!).

I've just been informed that technic'ly one of these lovely churches is actually in the "West Midlands Metropolitan County" and not Warwickshire ('tho it used to be). So I've had to make all sorts of changes (I am not an amused bear)! I wish my assistants would get these things correct from the start.

Well, I was passing this village on my way home from my holiday in Devon and Cornwall. It's another bear-related name, so I just had to drop in and visit this lovely St Mary's.

I think it's time to go back home to MY St Mary's and have a good snooze in the Children's Corner. 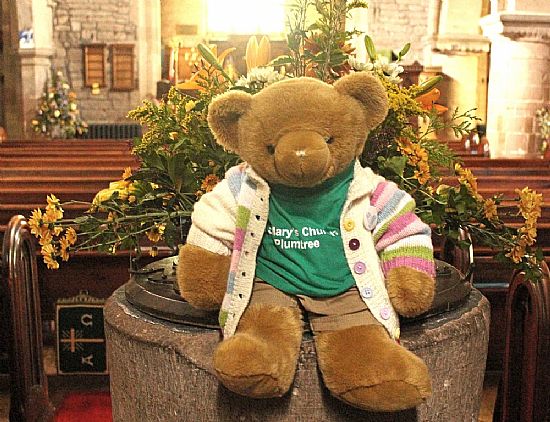 Another bear-related village! (Cubbington - geddit?). This is a big church and has a really big notice board as well. I squeezed myself rather gingerly onto the font so's I didn't knock the harvest flowers off. 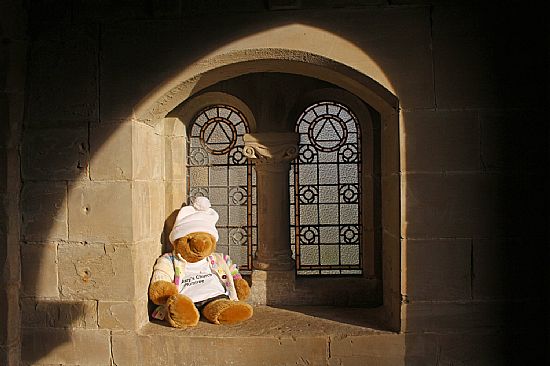 This is a little church in the middle of nowhere but near a big manor house that was having a lot of work done. [It's being converted to 13 apartments, Big Ted]. The notice board was a bit green and grungy so I was careful not to get too near it with my nice cardigan (not to mention my splendid fur).

The church was locked but Uncle Les took a very artistic photo of me in the porch window. 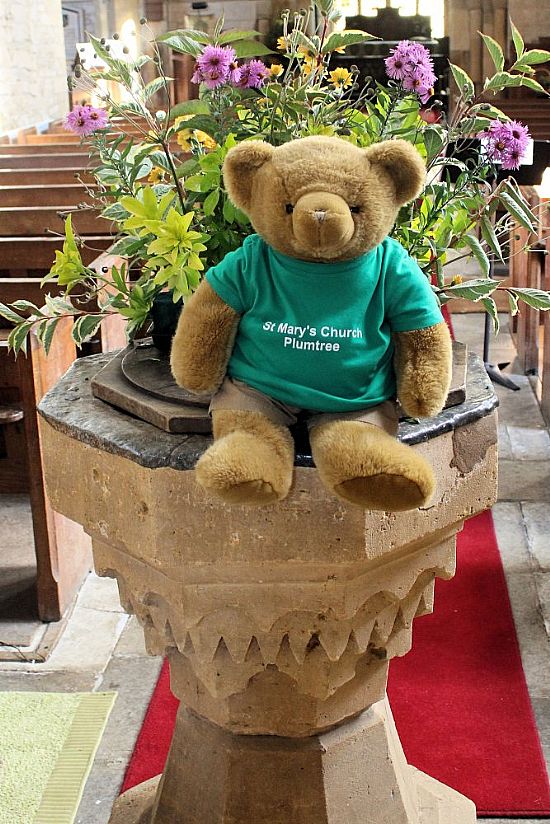 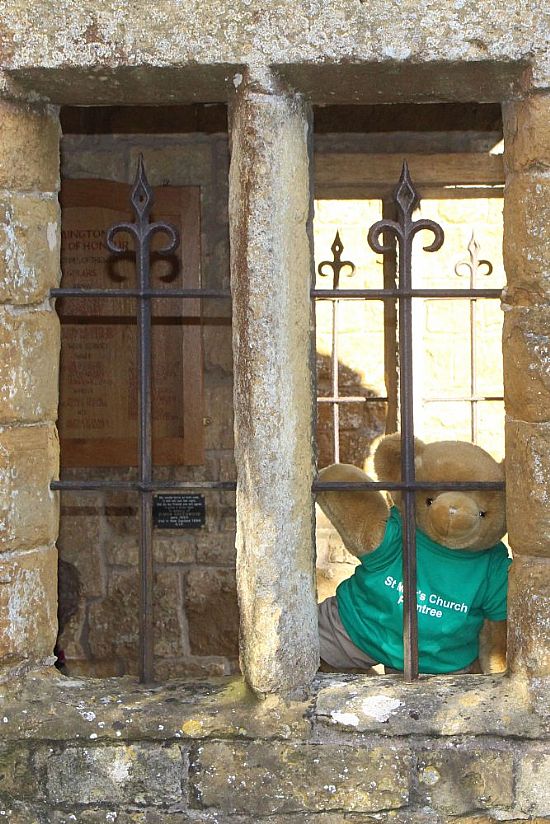 Look, this church has a huge notice board. Inside it also has 11 mouses and an apple map.  I found the apple map (it was a tapestry) but I could only find 7 mouses.

The mouses are in the church 'cos the man who made the pews and things was called "The Mouseman" and put mouses everywhere. [Robert Thompson of Kilburn, North Yorkshire, created much of the woodwork in the church in the 1930s. His signature was a carved mouse, Big Ted].

I had my photo taken in the porch - it's really funny and looks like I'm in prison!

This church didn't have a proper notice board for me to sit on, behind or under. But it did have these very jolly posters instead. 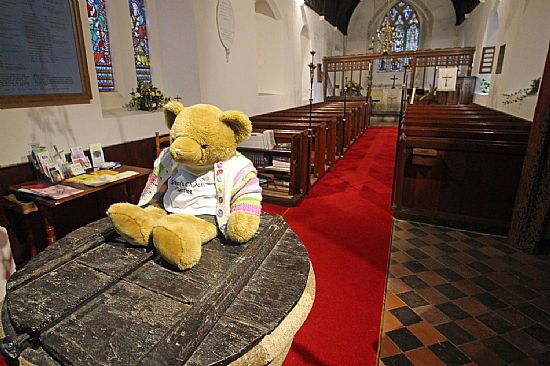 Another little St Mary’s in the middle of nowhere, and another one that is open. This church has a wooden tower and porch which make it look really old.

This St Mary’s a very small church near a place called BEARley (which you may remember I visited last year - St Mary's number 111). Sadly, I couldn’t go inside. 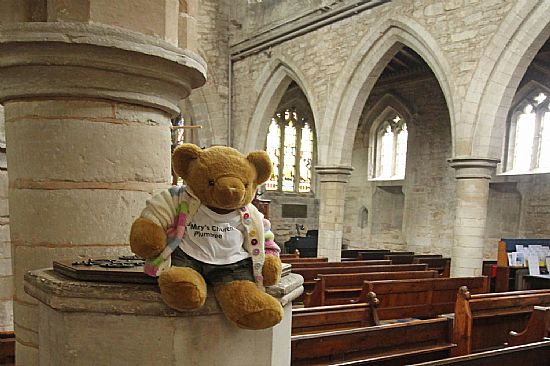 This is a really big St Mary’s. The bell tower is off to one side instead of at the west end like at my St Mary’s, and it has a wooden porch.

It is lovely inside with a special stained glass window with a picture of a narrowboat, and a statue designed by a chap called Eric Gill. Apparently he liked fonts as well [snigger]. 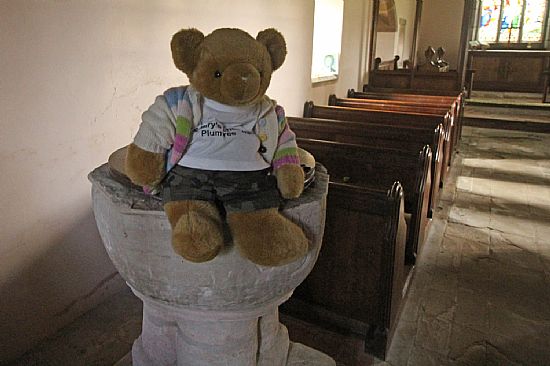 This church has a sign that says that it is open every day, all day; and it is! So I went inside.

It is a lovely little church and has a very nice font although the cover was a bit wobbly and I nearly fell off. We couldn’t find the light switch so this photo of me on the font is a bit murky.

Outside, the churchyard is rather special; it's a Local Wildlife Site with many wild flowers that are allowed to do their own thing. I didn't see any 'cos it was a bit cold and wintry when I visited. 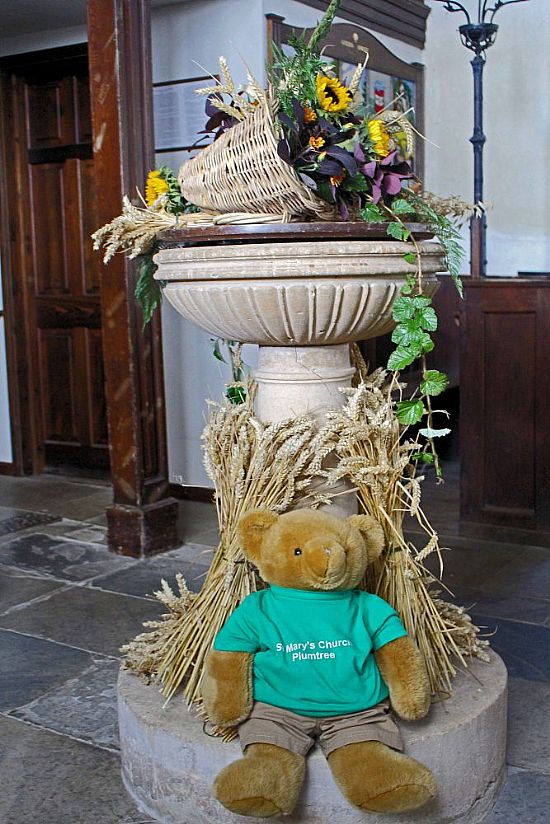 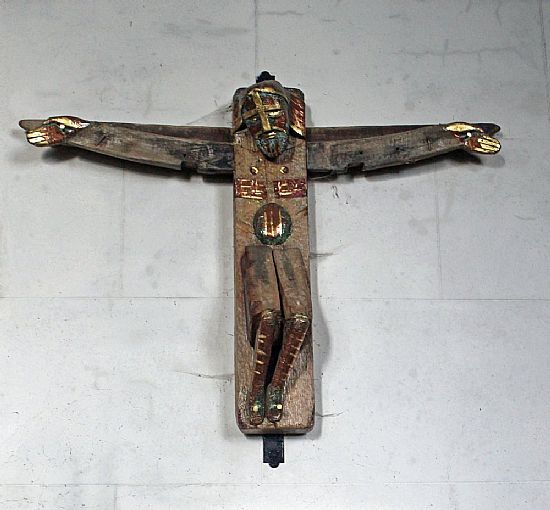 The notice board was a bit boring so I went inside and found that the church was decorated for harvest. I couldn't sit on top of the font so I sat at the bottom amidst the wheat (which was a bit prickly).

There are some lovely old windows here and a Memorial Crucifix by Peter Eugene Ball (who's made things for Southwell Minster as well). 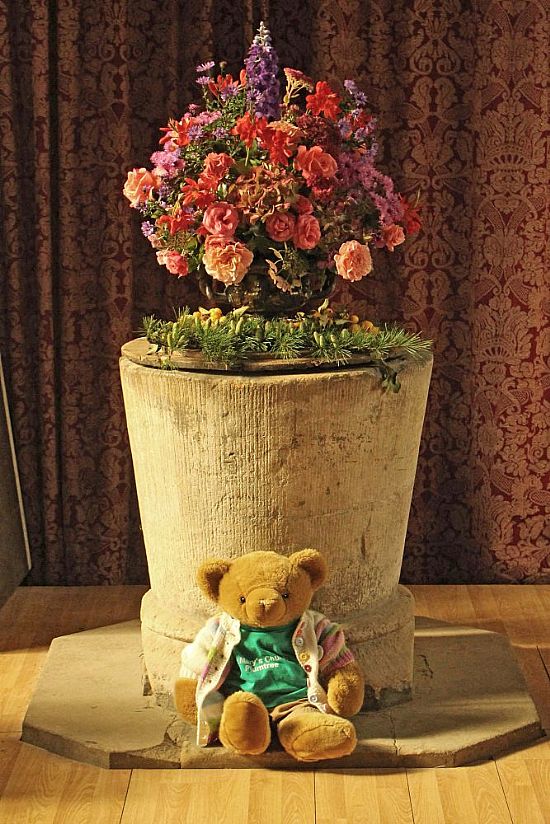 I went inside this lovely church where they were doing the flowers for their harvest festival. I said hello to a nice lady who had a new knee and couldn't walk very well.

I couldn't sit on the font to have my photo taken as there was a flower arrangement on it; I sat at the bottom instead. I was a little bit worried that the pink flowers would detract from my splendid fur (but I think I got away with it)! 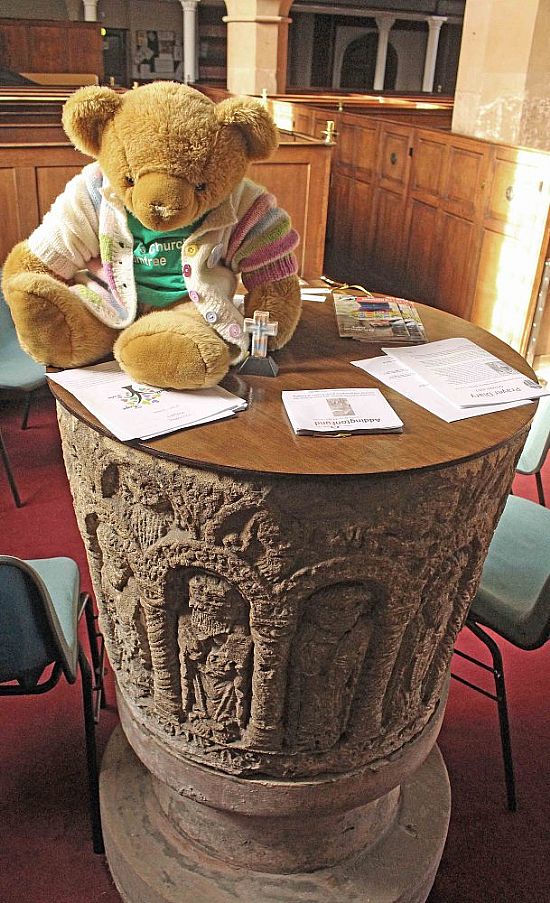 This is a lovely church that has been recently renovated. Some nice ladies said hello and I told them about my visits to St Mary's churches. There was a room with displays about the history of the church and the village. It was all very interesting.

They also had lots of things to read on their font.

This is a very big church as well and sort of built on a hill. You come in at the bottom and there are pews and steps up to the altar at the top. It’s associated with the Knights Templar who used to have a house nearby.

This is the church that used to be in Warwickshire but then was magically moved to the West Midlands. [The West Midlands metropolitan county appeared in 1974 after the passage of the Local Government Act 1972, to cover parts of Staffordshire, Worcestershire and Warwickshire. It embraces seven metropolitan boroughs: the cities of Birmingham, Coventry and Wolverhampton, and the boroughs of Dudley, Sandwell, Solihull and Walsall, Big Ted]

A pointy metal fence to sit on here – and the church was shut. This was a pity as it looks really big from the outside and I wanted to check if it was big on the inside too.