This page will help you keep up-to-date with what I've been up to. I'll also let you know here when I've made changes to my website that you might like to see (you'd better, Grrrr!).

On the Sunday of my holiday I took the day off from church visiting - I don't like to visit in case they're having a service. Instead I went to the East Anglia Transport Museum in Carlton Colville which is next to Lowestoft.

It was all very exciting - I travelled on three things beginning "tr": Tram, Train and Trolleybus!

I've been on a tram before (see my T'riffic Transport Tales), so I knew what to expect. We went to the end of the line, Uncle Les pushed his seat back to face the other way (it was very posh, the seat bottom moved as well), and we came back again. I wanted to go on the other tram as well, but it was only little and always full.

The train was the "East Suffolk Light Railway", which is actually a 2ft gauge railway - I've not been on one of those before (I have been on normal-sized trains though). It was quite wobbly and didn't have any springs. The seat was quite shiny wood and I nearly fell off (off the seat, not the train - that would have been truly awesome)!

I've saved the best for last - the trolleybus was amazing! It's like a cross between a tram and a normal bus but it doesn't have rails and it's powered by overhead electric cables. We went round the museum "town" three times, and really fast down the main bit and round the corners. I think the driver was racing against the tram and the train. It made me want to go "Wheeeee!" a lot.

We also looked around the museum-y bit and Uncle Les took photos of me sitting on and inspecting various things: a line painting machine; a milk float [I'll add them in a bit]. It was a very int'resting afternoon - and I didn't fall off anything although a couple of dogs gave me very worrying looks.

I've had a very exciting day today! It's been sunny so Auntie Fiona and Uncle Les took me out of Kibworth to a nearby village (it was Great Glen, Big Ted) where they were having a Harvest Fair in and around the church. There were lots of stalls and CAKES and such. But most exciting was an event called "Teddy Bear Abseiling" - so I had a go (TWICE). We were abseiling from the TOP of the church tower!

Technic'ly, I s'pose it wasn't abseiling, more like a zip wire but it was still great fun. The bit I didn't really like was going up to the top of the tower in a buttock bucket with the other victims intrepid aviators. I hit my nose against the wall a couple of times which wasn't pleasant (but you'll be pleased to know I wasn't injured and my splendid fur remained unsullied).

These three pictures below show me making my ascent of the tower (click on a picture to see a bigger version): 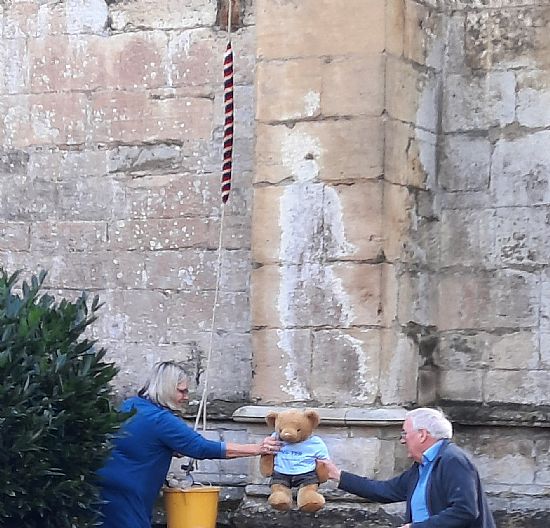 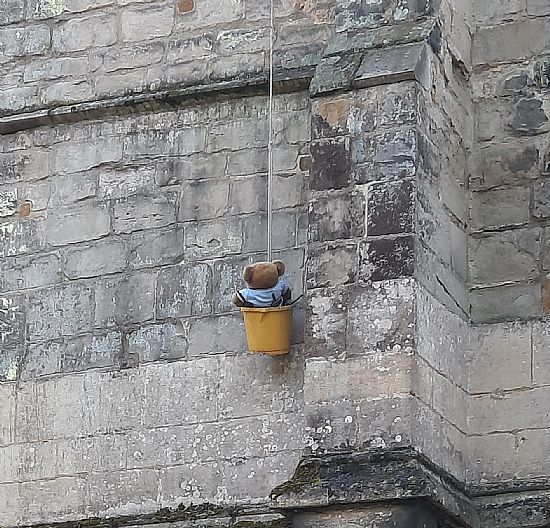 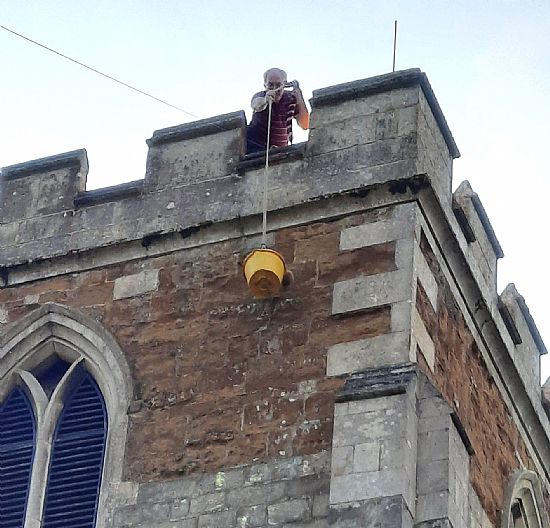 Auntie Fiona also took a couple of videos of my ascent and descent, you can see them below. Actually they're videos of my first descent and second ascent (which was worse than the first!) 'cos she was having trouble with the phone and the other videos she took were, frankly, rubbish! [If you're going to complain, you can try filming it yourself next time, Big Ted]. The coming down video is much shorter 'cos it was fast (that's prob'ly why it's called a ZIP wire - snigger). 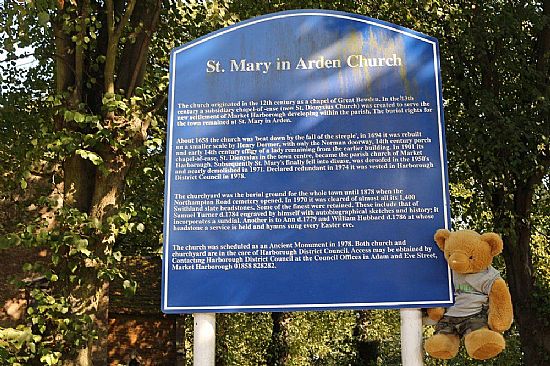 I've been to another local St Mary's, this time in Market Harborough. This is a nice town quite near to where I now live in Kib. It has lots of shops, a railway station and a church called St Dionysus (bet that's confused you!).

But it also has an old, disused, broken down church called St Mary's, and, even more confusingly, the sign calls it "St Mary in Arden Church". You can click on this photo to see a bigger version but you might not be able to see all the words.

The church originated in the 12th century and was the chapel of Great Bowden. Then about 1658 the steeple fell down taking much of the church with it. It was rebuilt in 1694 and then was finally de-roofed in the 1950s and nearly demolished in 1971 (I'm not sure why they stopped!).

You can read a bit more about my visit (and see more pictures of ME) on my Leicestershire page.